Diego Costa had looked like being the night's hero after cancelling out Adrien Rabiot's opener in an all-action display.

But Costa was substituted after an hour due to injury and Ibrahimovic struck seven minutes later to secure a 4-2 aggregate success.

Ibrahimovic, on the eve of the tie, had denied seeking revenge after 12 months ago being sent off at Stamford Bridge, but had vowed he was better than ever as he continues to chase the triumph in this competition which has proved elusive in his illustrious career so far.

As he impressed, duly PSG advanced to a fourth straight Champions League quarter-final and Chelsea were left to contemplate the probability of being absent from the competition next season.

Hiddink said of Chelsea's display: "I think when we go through the game, we started too much respectful in the first 10 minutes and they were dominating.

"They're a good team, it's very difficult to play them. [Costa] wasn't totally fit, but he desperately wanted to play. He wasn't fully fit."

The Dutchman acknowledged Paris St Germain's class, and their greater strength in depth.

"You see a bit of difference between two teams, when they have to make changes they have [Edinson] Cavani and other big players coming in," Hiddink said.

"We lost to a very good team I must say. We had in the first half also some efforts but we were not cool enough around the box." 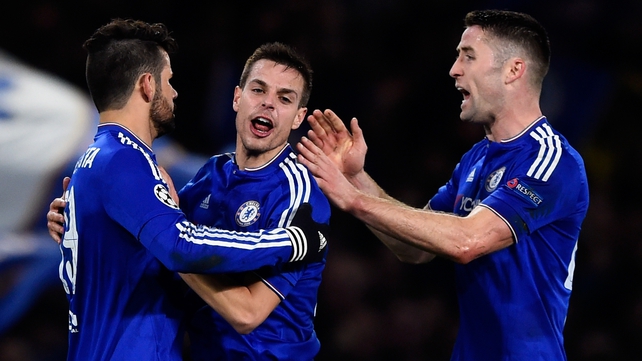 Eden Hazard was again disappointing and he was booed by a handful of home supporters as he was replaced 13 minutes from time.

Away goals had separated the sides in the last two seasons - Chelsea won the quarter-final tie in 2014, but were defeated at the last-16 stage in 2015 - and John Obi Mikel's strike on 16 February at Parc des Princes gave Chelsea a fighting chance.

The performance of Costa did, too. The striker was labelled a "fraud" on social media by PSG on the eve of the contest and shed his protective mask inside 10 minutes to reveal himself.

Costa forced a save from Kevin Trapp in the opening moments after Rabiot, in for the injured Marco Verratti, had given the ball away.

Then Angel Di Maria and Lucas Moura set to work, targeting Chelsea's left where Kenedy was deployed at full-back.

Branislav Ivanovic scampered back to deny Di Maria, after Lucas fed the former Manchester United winger, before Ibrahimovic stole in down the right and his cross beat Chelsea's defence for Rabiot to tuck in at the far post. Kenedy was missing in action.

The television cameras panned to Chelsea's injured captain John Terry, who was surely contemplating the end of his Champions League career. 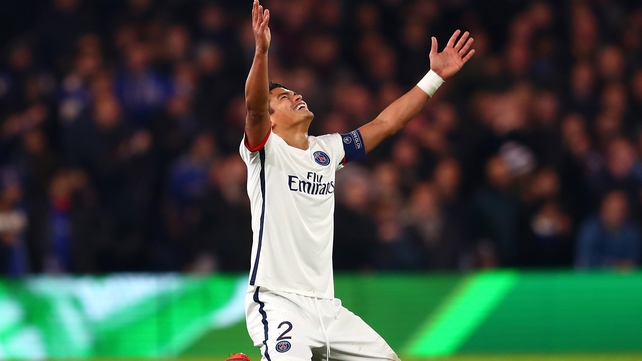 PSG, who are without challengers in Ligue 1, looked like they had not had to defend all season. And Costa was more of a nuisance than Laurent Blanc had predicted.

PSG, leading 3-1 and with Mikel's away goal wiped out, continued to play at a high tempo as they sought another. But they looked vulnerable, too.

Thiago Motta lost the ball in midfield to Pedro, who combined with Willian and then Costa, who did the rest. He turned Thiago Silva and fired into the bottom corner.

It was just his second Champions League goal in 15 games for Chelsea, but his 11th goal in 15 appearances under interim manager Guus Hiddink, whose only prior defeat since his appointment was in the first leg. It gave the Blues belief.

Ibrahimovic headed at Thibaut Courtois, while Cesc Fabregas shot wide and Hazard weakly at Trapp, who next saved sharply from Costa.

Hazard and Di Maria swapped shirts at half-time. Hiddink wanted Hazard to show his best after an anonymous first leg, but the Belgian was again poor.

Costa had been a menace, but departed and Chelsea's only other real attacking threat was Willian. He stretched Trapp before Hazard's poor follow-up was also saved.

Ibrahimovic then delivered, netting from Di Maria's cross. It was a cathartic moment for the Sweden striker, who missed the 2014 tie through injury and called Chelsea's players "babies" following his sending-off 12 months ago.