The Republic of Ireland Women finished their Cyprus Cup campaign on a high with a fully deserved 2-0 win over Euro 2017 qualifier opponents Finland at the Tassos Markos Stadium in Paralimni.

Two goals in the first 13 minutes from a Ruesha Littlejohn penalty and a Louise Quinn header were enough to put the Irish firmly in control and they never relinquished their grip after that, as they notched an impressive and morale-boosting victory.

Manager Sue Ronan made three changes from the side which started on Monday in the defeat to Hungary, with Niamh Fahey, Diane Caldwell and Denise O’Sullivan coming in for Savannah McCarthy, Rachel Graham and Megan Connolly as Ruesha Littlejohn moved from midfield to lead the attack.

Despite playing into a strong wind in the first half, the Irish quickly took hold of the game and opened the scoring after three minutes from the penalty spot. Katie McCabe was brought down following a run into the box and Ruesha Littlejohn confidently converted the spot-kick for her fifth international goal.

Having struggled to score goals all week, the Irish took a lot of heart from such a positive start and McCabe, who was terrorising the Finnish defence with her penetrating runs, almost added a second when her shot came off the base of a post with the 'keeper beaten.

Ireland stretched their lead on 13 minutes when McCabe played a short corner with Denise O’Sullivan and then hit a pin-point delivery to pick out central defender Louise Quinn, who sent a bullet header past the Finnish keeper.

Ireland dominated the half after that, with the Finland goalkeeper Tinja-Rikka Korpela having to produce a flying save to keep out a Littlejohn free-kick in the 37th minute.

At the other end, Emma Byrne was not to be outdone and she produced a spectacular one-handed save at full stretch to turn a shot from Natalia Kuikka around the post for a corner.

The Finns should have pulled a goal back on 40 minutes but Linda Sallstrom shot wide from close range on one of the few occasions the Irish defence was breached in the whole game.

The second half saw Ireland continue to dominate and Diane Caldwell hit the crossbar from close range in the 47th minute, while Korpela saved a Julie-Ann Russell free-kick three minutes later.

She then produced another excellent stop in the 70th minute to keep out a low show from McCabe after the winger had cut in from the right onto her favoured left foot.

Megan Connolly was introduced at half-time while Emma Hansberry, Clare Shine and Rachel Graham came on in the final third as Ronan got fresh legs on the pitch to ensure Ireland remained dominant.

The win gave Ireland a seventh-placed finish in the tournament but, more importantly, it was just the type of result Ronan had been looking for heading into next month’s crucial qualifiers against Montenegro and Spain.

“I am absolutely delighted,” said Ronan after the game. “For the fourth time this week we produced another excellent performance and dominated the game. The difference this time is we managed to turn that possession into goals and we also kept our first clean sheet of the tournament.

“While it is nice to beat Finland, after losing to them twice in the past three years, we know that this result will count for nothing in June. However, it should help us believe that we can go to Helsinki and get the win we need.

“It’s been a good tournament for us. We gave four young players their senior debuts while others got much needed game-time and experience.

"Younger players like Katie McCabe, Megan Connolly and Savannah McCarthy really stepped up to the mark and showed that they are well able for this level, while the more established players performed consistently well all week.” 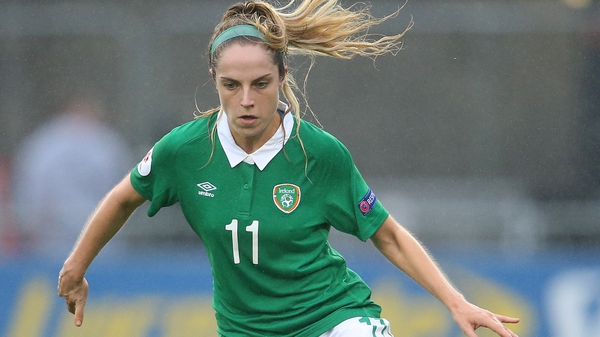