Olivier Giroud and Theo Walcott netted braces as Arsenal eased through to the FA Cup quarter-finals, although the comprehensive victory at Hull looks to have come at a cost for Arsene Wenger's men.

Winning the competition for a third straight year looks to be the Gunners' most realistic shot at silverware, having fallen eight points behind surprise league leaders Leicester and requiring a huge turnaround to avoid being dumped out of the Champions League by Barcelona next week.

Wenger refused to pin all of his trophy aspirations on the FA Cup ahead of the trip to Hull, but will have no doubt been relieved to see Arsenal win this fifth-round replay 4-0 - albeit concerned that Per Mertesacker, Gabriel and Aaron Ramsey all limped off at the KC Stadium.

Giroud's first goals since 13 January were key to this victory, with the France striker hitting a brace the day after his partner gave birth to a baby boy.

"For Ramsey I am little bit more concerned. It's a thigh injury." - Arsene Wenger

The 29-year-old gleefully steered home a wayward David Meyler pass late in the first half and then fired home a cross from Walcott, who added gloss to the scoreline by turning home coolly and then fizzing past Eldin Jakupovic late on.

It makes this the third straight season that Arsenal have knocked Hull out of the FA Cup, but concerns over Mertesacker, Gabriel and Ramsey will likely dominate the post-match talk.

Wenger told BT Sport 1: "It was a shock as we lost our two centre-backs in the game and then we lost Aaron Ramsey.

"Mertesacker is not serious, just a little concussion, and I think Gabriel looks all right but for Ramsey I am little bit more concerned. It's a thigh injury... but apart from that we have played well."

Whether they will be ready for Sunday's hastily-arranged quarter-final with Watford is doubtful - unlike the result on Tuesday, which looked likely after Walcott steered home inside three minutes.

That goal was chalked off for offside but Arsenal continued to threaten, with Joel Campbell curling over at what was an atmosphere-free start to proceedings at the KC Stadium.

David Ospina produced a wonderful one-handed save to deny Meyler and again threw his body in the way to deny Nick Powell, although the flag already had already been raised by the time Ahmed Elmohamady eventually struck home. 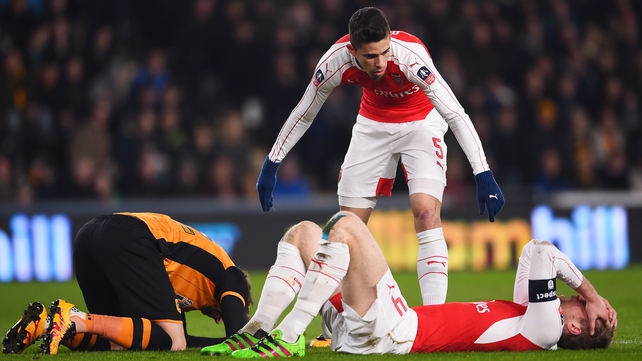 Mertesacker limped off in the 33rd minute as the tie looked to perhaps be turning the hosts' way, only for Meyler's shocking decision five minutes before half-time to put Arsenal on their way.

The Republic of Ireland midfielder decided to direct the ball back to goalkeeper Jakupovic - a poor decision capitalised on by Giroud, rolling a right-footed shot past Hull's back-up goalkeeper.

It left Jakupovic - man of the match as the sides drew 0-0 at the Emirates Stadium - without much hope, as did the Kieran Gibbs effort that quickly followed, rattling the crossbar from 30 yards.

Alex Bruce came close with a header before half-time, but Arsenal returned from the break strongly and Jakupovic needed to be at his best to tip over a dipping Mohamed Elneny volley.

Mo Diame threaten in the air at the other end, but the visitors injury worries worsened when Gabriel signalled to the bench his night was over.

Hull attempted to capitalise on the makeshift centre-back pairing of Calum Chambers and Nacho Monreal, with Powell striking wide and substitute Sone Aluko coming close with flicked a header, but Arsenal soon moved up a gear.

The recently-maligned Walcott clipping a lovely ball for Giroud to fire home and, after the disappointment of seeing substitute Ramsey trudge off and be replaced by Jeff Reine-Adelaide, provider turned scorer in the 77th minute.

Campbell was the architect this time, firing a lovely, low pass that Walcott controlled and turned home with class.

The England forward added another with two minutes remaining, with his deflected near-post strike beating Jakupovic to wrap up a comprehensive victory. 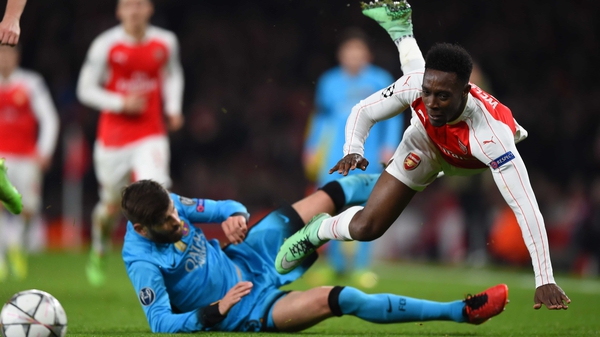