Mike Magee produced a superb display on his return to Los Angeles, while Robbie Keane was also on target as the Galaxy began their Major League Soccer season with a 4-1 win against DC United.

Magee scored twice and had a major hand in the other two goals in his first game since re-signing with the club he left in 2013.

Ashley Cole was also among the debutants, lining up with ex England team-mate Steven Gerrard in Galaxy's side, but they trailed after five minutes through Lamar Neagle's strike.

Magee took centre stage after replacing Giovani dos Santos at half-time. He set up Daniel Steres for a 54th-minute equaliser and then scored himself 10 minutes later.

Seven minutes from time Keane scored a third from the spot, after Magee had been fouled in the area by Andrew Dykstra, and Magee rounded off the victory with his second four minutes later.

Patrick Vieira got off to a winning start as New York City coach, with his side edging a seven-goal thriller in Chicago.

Thomas McNamara's 10th-minute opener was cancelled out by the Fire's Razvan Cocis, but Tony Taylor and Khiry Shelton scored to give City a 3-1 lead at the break.

Kennedy Igboananike pulled one back early in the second half but shortly after the hour mark Mix Diskerud restored the two-goal cushion. David Accam's penalty reduced the arrears once again but New York, who were without the injured Frank Lampard, held on.

Like last year's final, Diego Valeri opened the scoring while this time Fanendo Adi scored the second and the prize was three points instead of the MLS Cup.

Joao Plata scored once in each half to give Salt Lake a seemingly unassailable lead, but Cyle Larin struck four minutes into stoppage time and Adrian Winter rounded off a remarkable 60 seconds with the leveller.

Sebastian Giovinco scored an 82nd-minute penalty and then teed up Marco Delgado in stoppage time as Toronto recorded a 2-0 win away against New York Red Bulls while Ignacio Piatti bagged a brace as the Montreal Impact shrugged off the absence of Didier Drogba to down Vancouver Whitecaps 3-2.

Chris Wondolowski's goal early in the second half earned San Jose Earthquakes a 1-0 win against Colorado Rapids, while Fabian Castillo and Maximiliano Urruti scored in Dallas' 2-0 win against Philadelphia Union. 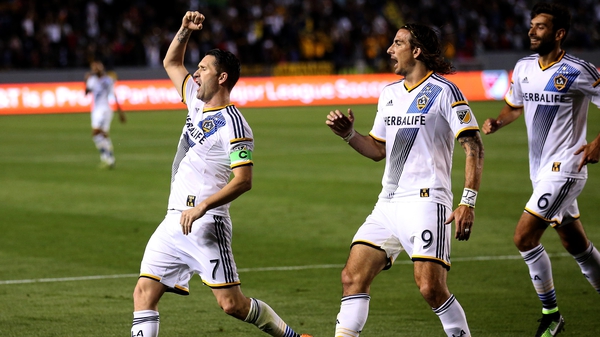