Republic of Ireland boss Martin O'Neill has not given up hope of having veteran goalkeeper Shay Given available for the Euro 2016 finals.

Given, who celebrates his 40th birthday next month, completed a period of rehabilitation at the Aspetar orthopaedic and sports medical hospital in Qatar last month as he attempts to battle his way back from knee surgery.

O'Neill is keen to have his most experienced campaigner available to him this summer and is monitoring the Donegal man's situation.

Speaking on Wednesday in Paris at an event to mark the 100-day countdown to the tournament, he said: "Seamus McDonagh [the national goalkeeping coach] is in close contact with him.

"He hasn't played really since coming off against Germany, and that's a fairly lengthy period of time, but if he's making good progress, then we'll see how it goes."

Given, currently plying his trade at Stoke City, has not played since damaging his knee during the Ireland's famous 1-0 qualifying victory over world champions Germany in October last year with West Ham's Darren Randolph, who replaced him that night, having started in the final group game against Poland and the play-off double-header against Bosnia-Herzegovina.

Given retired from international football after the Euro 2012 finals having collected 125 senior caps, but resumed in a friendly against Oman in September 2014 and has since taken his tally to 133 after re-establishing himself as his country's number one before injury struck.

"Shay is back out on the grass, which is encouraging," he said. "He is working with Andy Quy, our goalkeeping coach.

"It's early days yet. He's not doing all elements of the sessions with them at the moment but he is back on the grass, which is encouraging for him.

"It has been a long time but we're hopeful that before the end of the season he will be fit and available." 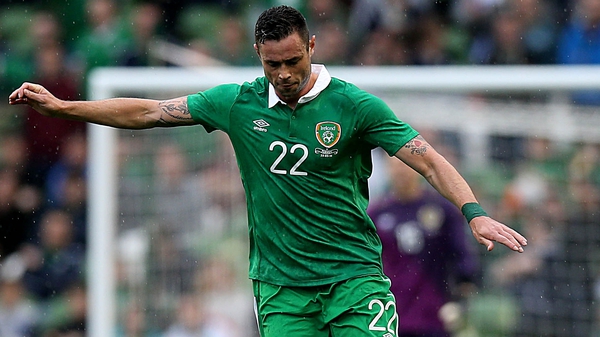