Celtic stretched their lead at the top of the Ladbrokes Premiership to six points with a 3-0 win over Inverness but the Highlanders contributed markedly to their own downfall.

It was a nervy first-half performance from Ronny Deila's side at a sodden Parkhead and they would have gone into the interval behind had Caley skipper Gary Warren not missed an open goal with a header.

Hoops keeper Craig Gordon saved a one-on-one with Jordan Roberts just after the break and the Highlanders were made to pay when Gary Mackay-Steven flashed a drive past Owain Fon Williams.

Top scorer Leigh Griffiths added a double in the second half to increase the gap over second-placed Aberdeen and they have the chance to further ahead against Hamilton next Friday night but there is no doubt that, despite the scoreline, the fans are looking for more conviction and certainly more entertainment from their side at the start of matches.

The Celtic supporters who made their way to the east end of Glasgow amid relentless rain were encouraged to see the inclusion of 19-year-old Patrick Roberts on the bench.

The English midfielder played and shone in a couple of development games since signing an 18-month loan deal from Manchester City and as it transpired he made an encouraging cameo appearance late in the game.

But it might have been different by then. Inverness looked unruffled in the early stages as Celtic probed tentatively.

The visitors should have taken the lead in the 17th minute when midfielder Iain Vigurs' free-kick from the left was completely missed by the flailing Gordon but Warren, with an empty goal to aim at, headed wide.

It was a remarkable miss and sparked the champions in to life only for a moment with Griffiths drawing a decent save from Fon Williams with a drive.

John Hughes' side began passing the ball around with growing assurance and midfielder Ross Draper's drive from the edge of the box was deflected wide for a corner which came to nothing.

Then a swift Caley break following a Celtic corner, with the Hoops defence out of position, ended with Jordan Roberts playing in Miles Storey and of all people Griffiths had raced back deep into his own box to snuff out the danger.

Boos from the Hoops fans accompanied the half-time whistle. Three minutes after the break Caley had another great chance on the break when midfielder Liam Polworth sent Jordan Roberts flying past Hoops defender Erik Sviatchenko but Gordon rushed from his line to block the shot.

It raised the level or ire among the home fans another notch but that was soothed somewhat when, as Celtic pressed Caley back into their own box, Mackay-Steven despatched a fine shot from the edge of the box.

And when Griffiths drove in off the far post from 16 yards in the 59th minute the points were effectively secured and Celtic began to play with a little more confidence.

In the 65th minute following a good Celtic move Stefan Johansen shot straight at Fon Williams before being replaced by Ryan Christie - Scott Allan had come on for Stuart Armstrong earlier - and Inverness tried to get back into the game.

There was a big cheer in the 81st minute from the Parkhead faithful when Patrick Roberts came on for Mackay-Steven to make his debut but the fans roared louder when, in the second of three added minutes, Griffiths drilled in his second of the afternoon from the edge of the box to take his tally to 32, showing his importance to Deila. 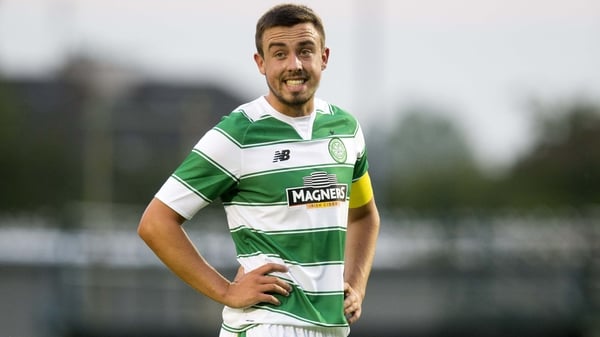