Celtic eased their way into the quarter-finals of the William Hill Scottish Cup as expected with a 2-0 win over Lowland League side East Kilbride at Airdrie's Excelsior stadium.

Back-to-back defeats against Ross County in the League Cup semi-final and Aberdeen in the Ladbrokes Premiership had piled pressure on boss Ronnie Deila.

In reality there was no prospect of a shock here, although the Hoops fans booed off their team off at the interval as they led only by striker Leigh Griffiths' 20th-minute opener, his 29th goal of the season.

Deila and the Celtic supporters were able to relax after new striker Colin Kazim-Richards, making his first start, added a second in the 51st minute with his first Hoops goal and the Scottish champions ran out easy winners.

It was the end of the road for the part-timers who had beaten Forres Mechanics, Stenhousemuir and Lothian Thistle, while Celtic go into the draw for the last eight which takes place at Hampden Park on Monday evening.

Celtic fans were pleased to see the return of fit-again Charlie Mulgrew for the first time since the Europa League clash with Ajax in November.

Logan Bailly replaced Craig Gordon in goal, with Efe Ambrose and James Forrest returning and Kazim-Richards starting after coming on as substitute against Aberdeen. Unsurprisingly, the Parkhead side dominated.

There was some desperate defending from East Kilbride early on, with goalkeeper Matt McGinley making a good save from defender Erik Sviatchenko's powerful drive after Mulgrew had headed wide from a Gary Mackay-Steven corner.

It was from another corner that the Hoops took the lead. Mackay-Steven's cross from the right was met by the head of defender Dedryck Boyata, with the ball coming off Griffiths a yard from goal before ending up in the net.

If the Hoops fans expected the floodgates to open they were disappointed, although McGinley made fine saves from Forrest's long-range drive and Mackay-Steven's shot from 16 yards, after good work down the left from left-back Kieran Tierney.

The Celtic fans were looking for more in the second half and there was a positive start when, after Griffiths's over-head kick was blocked on the line, Kazim-Richards pounced to force the ball over.

East Kilbride's resistance was weakening, but they remained resolute. Defender Craig Howie sent the ball against his own post as he made a clearance before Griffiths went close with another effort from yet another Celtic corner.

It was one-way traffic towards McGinley's goal, although Bailly did make one comfortable save from Jack Smith in the 71st minute following a rare East Kilbride break.

Celtic continued to push for a third, with skipper Scott Brown curling a shot from 20 yards off the outside of a post, but the match petered out, with East Kilbride taking the applause from their fans after the final whistle signalled their exit, the Hoops supporters appearing less impressed with their side's display. 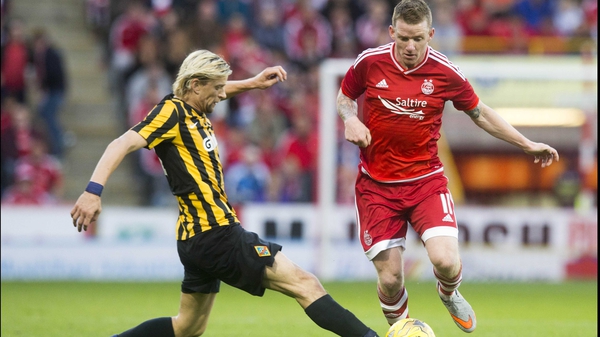