Manchester United eased the pressure on Louis van Gaal as they blew away Stoke with a fine display of ruthless attacking football in a 3-0 win at Old Trafford.

The announcement of Pep Guardiola's appointment at Manchester City, and a fruitless transfer deadline day, had led to more pessimism among United's long-suffering support before kick-off.

The United fans booed their team off following the last game here - a 1-0 defeat to Southampton.

But they had something to cheer about on Tuesday as United pummelled Stoke in their one of their best performances of the campaign.

Wayne Rooney moved to within five goals of Bobby Charlton's all-time scoring record with his seventh goal in seven games and Jesse Lingard nodded in a fine ball from Cameron Borthwick-Jackson to put United ahead in the 14th minute.

The goal of the night belonged to the excellent Anthony Martial for his curler from the far corner.

Van Gaal raised the possibility of resigning after losing the reverse fixture, but this win will boost his confidence and that of his team, who remain five points behind fourth-placed Arsenal.

As Van Gaal walked down the touchline just before kick-off, a giant surfer flag traversed the Stretford End marking this week's anniversary of the 1958 Munich air disaster.

The Busby Babes, of course, were fabled for their thrilling attacking football and the current crop of men in red did their best to put on a display their predecessors would have been proud of.

No one embodies the flair of the likes of Charlton and Duncan Edwards in this current team than Martial. 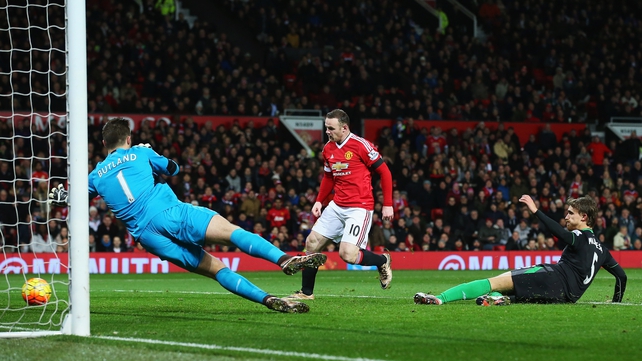 The Frenchman, starting on the left wing, gave Glen Johnson a torrid time from the first whistle, turning him inside out on several occasions.

He playfully chipped the ball between the right-back and Ibrahim Afellay to play in Juan Mata early on but he dragged his shot wide.

After a sustained period of pressure, Van Gaal's team took the lead. It was a goal that was forged and finished by two academy products. Borthwick-Jackson gained a yard on Johnson down the right to cross for Lingard, who stooped low and nodded in.

The United fans could hardly believe their eyes. Their team had scored at home in the first half for the first time since September.

The home fans were on their feet seven minutes later when United doubled their lead. Lingard set Mata free down the right. He laid the ball off for Rooney, who found Martial at the back post and he curled a sumptuous shot into the far corner.

Stoke's creaking defence weakened further when Phillip Wollscheid hobbled off and was replaced by Phil Bardsley.

Mata placed a free header wide near half-time, but Van Gaal still went down the tunnel at the break a happy man.

United did not relent in the second half. Rooney shrugged Johnson off and banged the ball past Jack Butland, but Roger East felt the captain had pushed the ailing right-back.

The referee had no complaints when Rooney put the ball in the net two minutes later. Mata raced through the middle and found Martial on the left, who squared to Rooney and he had the simplest of finishes at the back post.

United eased off for the remainder of the second half. Three-nil was more than a satisfactory scoreline and Van Gaal lapped up the applause as he headed down the touchline after the final whistle. 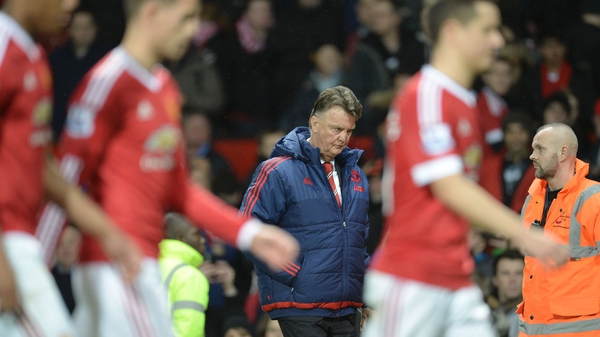