East Kilbride FC will take Celtic to their tiny K-Park ground in their Scottish Cup last-16 tie if they get past fellow non-league side Lothian Thistle Hutchison Vale.

Chairman Mark Horner said "wow" after his club were pulled out of the hat alongside the Glasgow giants at the draw at Hampden Park.

The capacity of the Lowland League ground is around 500 and Horner will look to double it for the visit of the Hoops if they win their fourth-round tie which was postponed at the weekend due to snow, with the rescheduled game on 20 January.

He told Press Association Sport: "It just puts all the more pressure on the tie we have against Lothian and we will be giving that all the respect it deserves but - wow.

"It is a dream tie for both clubs.

"We have had slight discussions with what would happen if we drew a big team - although I didn't think it was as big as this - and we will be trying our best to make it go ahead there.

"You can't buy history and that is the way we are looking at it.

"Right now we have a capacity of 500 but we have looked at putting stands in, we will be taking advice.

"It is a realistic ambition, very much so. I am not sure what the capacity could go up to, that will be down to health and safety and the authorities but near enough 1,000."

Scottish FA chairman Stewart Regan insists capacity would not necessarily be an issue.

He said: "There is a lot of thing to consider, not just security issues but discussions with the police and that will all happen over the course of the next couple of weeks.

"There is no minimum capacity just a health and safety and security legislation to take account of."

Celtic striker Leigh Griffiths, who scored a double in the 3-0 away win over Stranraer in the fourth round on Sunday, said: "It is a glamour tie for East Kilbride or Lothian Thistle but as I said before, it is all about what we do.

"If we turn up and be professional there will be no problems.

"They will be both going at it hammer and tongs and it will be interesting to see who we get.

"But these ties are all about getting into the next round."

Elsewhere, the last 16 draw cast Edinburgh rivals Hearts and Hibernian together at Tynecastle when the ties take place over the weekend of 6 and 7 February.

The other ties see Championship leaders Rangers take on top flight Kilmarnock at Ibrox, while Motherwell meet the winner of Stirling Albion and Inverness.

Dundee and Falkirk play for the right to go to Dumbarton. 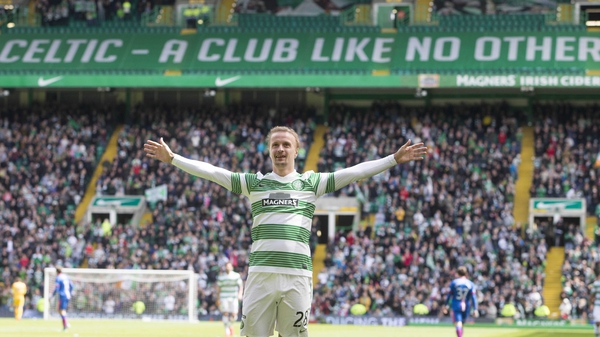