Huesca sprang a mighty upset with a 3-2 victory over Villarreal in the Copa del Rey round of 32 first leg.

Despite struggling near the foot of the Segunda Division, Huesca inflicted an embarrassing defeat on their high-flying La Liga opponents.

They took the lead twice before Darwin Machis struck the winner in the 76th minute of a pulsating encounter before Christian Fernandez was sent off in injury time.

Two first-half goals from Sola and Aymeric Laporte in the space of six minutes were enough for Bilbao, who sit fourth in La Liga, to see off the minnows.

Mart Roger netted an 84th-minute equaliser as Levante and Espanyol fought out a 1-1 stalemate.

Senegal forward Mamadou Sylla had fired Espanyol into a first-half lead, only for Roger to save the first-leg encounter.

The Segunda Division was able to celebrate another upset of top-flight opposition when Mirandes sank Malaga 2-1.

Lago Junior was on hand to supply the 70th-minute winner for the underdogs after the rivals had exchanged goals in a finely-poised match.

And La Liga was humbled for a third time on a busy night of cup action when Eibar crashed to a 3-0 rout by Ponferradina. 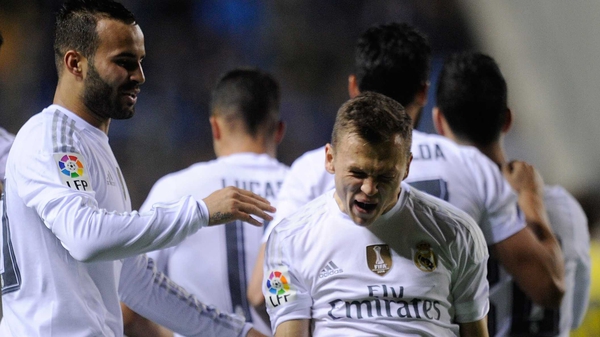