Gerard Deulofeu turned in a master-class to send Everton into the Capital One Cup semi-finals and fulfil Middlesbrough boss Aitor Karanka's prophecy.

Spaniard Karanka worked with compatriot Deulofeu as a 14-year-old during his time as a national youth coach, and tipped him for the top all those years ago.

And he found himself on the receiving end at the Riverside on Tuesday evening as the midfielder opened the scoring with a stunning solo effort and then provided the ammunition for Romelu Lukaku to head the visitors into a 2-0 lead with just 28 minutes gone - and that is the way it finished - in front of a largely shell-shocked crowd of 31,628.

Roberto Martinez's men can now put up their feet briefly ahead of Monday night's Barclays Premier League clash with Crystal Palace, while Boro must dust themselves down for a tricky trip to Ipswich on Friday evening.

Everton were unbeaten in five and in no mood to surrender that record, or even to be extended the way neighbours Liverpool were by the Teessiders last season with the Reds finally edging home 14-13 in a dramatic penalty shoot-out.

From the off, they kept the ball moving, working to drag Boro out of position and create the gaps from which the likes of Lukaku and Deulofeu could wreak havoc. 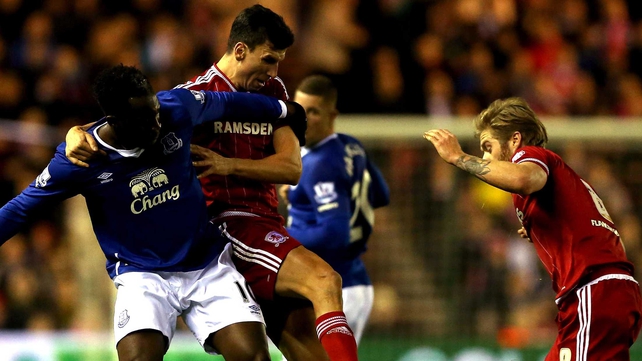 The Sky Bet Championship promotion hopefuls might have taken the lead with goalkeeper Joel Robles turning away Stewart Downing's 17th-minute free-kick before being bundled into the net along with the ball to the sound of the referee's whistle from the resulting corner.

But the tie was effectively settled inside eight minutes as top-flight class was made to tell.

Boro simply could not get anywhere near Deulofeu as he set off from the centre circle and skipped past every approaching red shirt with the minimum of fuss before steering a right-foot shot past goalkeeper Tomas Mejias and into the bottom corner.

The Spaniard turned provider eight minutes later, accepting Ross Barkley's raking pass and bamboozling emergency left-back Fernando Amorebieta before delivering the perfect cross for Lukaku to glance a header wide of Mejias and in off the post.

Cristhian Stuani forced Robles into a diving save with 10 minutes of the half remaining and Kike saw a delicately chipped effort drop just wide with the keeper beaten, but Everton left the pitch at the break knowing they had one foot in the last four.

Robles had to tip away Downing's stinging 59th-minute drive after Stuani's enterprising run, and Boro saw appeals for a 64th-minute penalty for handball waved away after Emilio Nsue's ball into the box hit Brendan Galloway.

Stuani headed just over from Nsue's inviting cross when he really should have scored with 20 minutes remaining, but there was simply no way back for Karanka's side.

Lukaku spoke to Sky Sports before leaving the pitch and was understandably delighted to progress to the Capital One Cup semi-finals. "We just have to work hard and keep doing what we have been doing," the Everton striker said.

"We are hungry, young players and want to improve game after game. I think it shows." 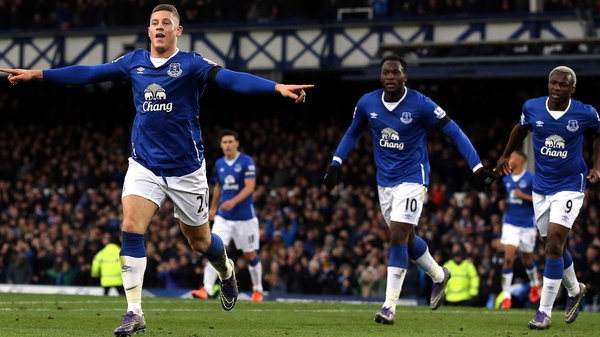