Jamie Vardy broke Ruud van Nistelrooy's scoring record but Leicester had to settle for a draw against Manchester United and second place in the English Premier League.

In another thrilling performance by Claudio Ranieri’s side, the Foxes blitzed United with wave after wave of attack in search of a second goal.

They had to settle for a 1-1 draw after Bastian Schweinsteiger headed home an equaliser in first-half injury time.

The draw meant Leicester were unable to reclaim top spot, but Ranieri will not be too disheartened.

Although they failed to grab all three points, this performance showed they are capable of challenging for a top-four place at the end of the season.

And it probably put a million or two on Vardy's value too. In front of England manager Roy Hodgson, he was simply excellent again.

“Obviously delighted, but the main thing was the performance and I think we put in a great shift,” said Vardy afterwards.

“It’s unbelievable. There has been a lot of focus on me, but I’ve been keeping my head down and concentrating on the game and getting the three points.”

He now holds the Premier League record, but he still has one goal to go before he can equal the record of Ireland’s Jimmy Dunne in England’s top flight. 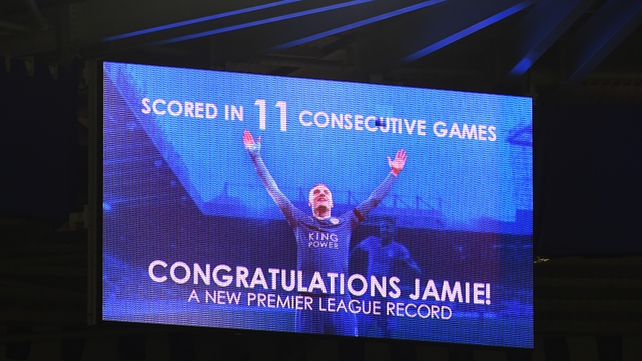 Hodgson's captain Wayne Rooney, on the other hand, was substituted in the 68th minute after another poor display.

He was not the only struggling performer in red. United lacked pace, energy and ideas and although they improved in the second half, they should consider themselves lucky to escape with a point.

A rousing build-up which involved a trumpet, some raucous chanting, and a re-run of the highlights from last year's 5-3 win in the corresponding fixture, whipped the home support into a frenzy at the King Power Stadium.

The Leicester players were up for the occasion too, none so more than Vardy. The striker hunted every red shirt he saw from the first whistle.

Michael Carrick carelessly passed the ball to the red-hot striker deep inside the Leicester half, but he squared to Ngolo Kante and his deflected shot flew wide.

United's defence was creaking under the pressure. Ashley Young entered the book for a cynical foul that prevented the vibrant Riyad Mahrez from breaking away.

Mahrez was fouled three times in the opening half as United could simply not deal with the winger's pace.

The visitors, in contrast, offered little. Rooney had two lame attempts at goal and that was it in the opening stages.

“It’s unbelievable. There has been a lot of focus on me

City were well on top and it came as no surprise when they scored. The name of the goal-scorer was just as unsurprising.

As soon as Vardy lost Young and raced on to Fuchs' pass, there was only ever going to be one outcome.

The 28-year-old kept his composure and struck the ball past David de Gea with confidence before being mobbed by his team-mates. It was nothing more than Leicester deserved.

Leicester fans taunted the travelling support. ‘Louis van Gaal, he sends you to sleep’ they chanted with glee.

The United supporters would have been forgiven for nodding off or making an early departure for the M6. Their team were producing absolutely nothing while Leicester were threatening to run riot.

Mahrez went close twice while Rooney fell too easily looking for a penalty.

Then, all of a sudden, United were somehow level.

Danny Drinkwater gave away a corner and Daley Blind whipped in the cross which Schweinsteiger nodded in, pictured below. 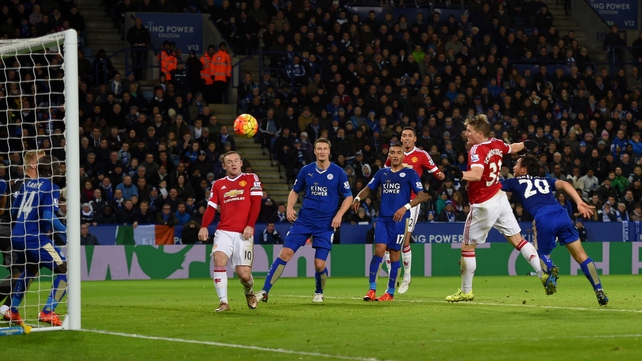 The German almost put United ahead after the break with another close-range header, but Kasper Schmeichel saved.

With Vardy tiring, Leicester were unable to maintain the momentum they had before the break.

They still looked the more threatening side, however. Kante broke and found substitute Leonardo Ulloa, but De Gea saved to keep United in it.

Then, with 22 minutes left Van Gaal put Rooney out of his misery and replaced him with Memphis Depay.

The Dutchman had a superb chance to nick it at the death but he blazed over. 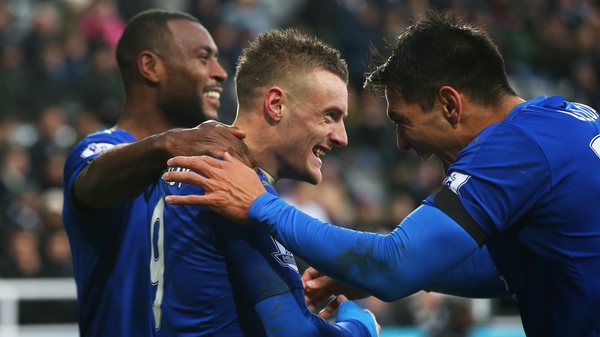