FIFA's ethics watchdog has rejected suspended President Sepp Blatter's claim that he is not subject to its rules and that only Congress can bar him from his role as head of the scandal-plagued global soccer body.

Blatter has been suspended for 90 days along with European soccer boss Michel Platini, engulfed by a deepening corruption scandal as the sport faces criminal investigations in Switzerland and the United States.

FIFA's Ethics Committee is investigating their conduct and they could face a much longer suspensions when the final verdict in the case is announced, probably in December.

In a Swiss television interview on Wednesday, Blatter compared himself to a head-of-state who could only be removed by parliament. He said that it was up to FIFA's Congress, consisting of the 209 national football associations who each hold one vote, to oust him.

However, Andreas Bantel, spokesman for the Ethics Committee, told Reuters on Thursday. "The FIFA code of ethics applies to anyone who is involved in football worldwide and there are absolutely no exceptions whatsoever."

The FIFA corruption scandal broke in May with a police raid and arrests of soccer officials at a Zurich hotel just before a congress of the body. Some 14 officials, including two former vice-presidents, have been indicted in the United States.

Blatter also faces a criminal investigation in Switzerland over a 2million Swiss franc ($1.95m) payment from FIFA to Platini in 2011 for work completed by the Frenchman nine years earlier.

Platini, who had been favourite to replace Blatter at the next election in February, has been barred from the FIFA presidential race because of his ban, although he could be allowed back in if he wins an appeal. 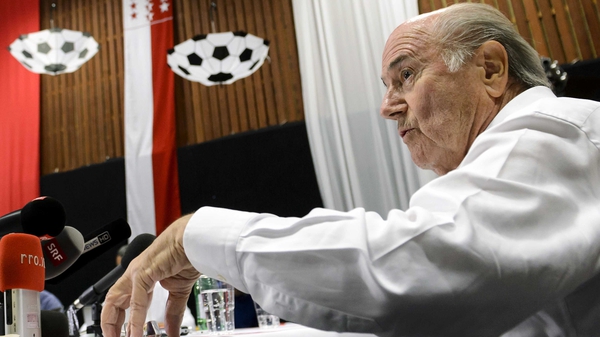