A double from Jonathan Walters secured an Irish victory over Bosnia-Herzegovina at the Aviva Stadium, as Martin O'Neill's side booked their place at next summer’s Euro 2016 championships in France.

A goal in either half saw the Boys in Green run out 3-1 winners on aggregate to qualify for their second consecutive European Championships, with the Stoke City striker the returning hero for Ireland.

Walters opened the scoring with a well-struck penalty in the 24th minute, before securing the victory with a composed finish at the back post in the 70th minute to send the capacity crowd crazy as the Lansdowne Road venue rocked until the final whistle.

The Ireland crowd might have been late into their seats as kick-off approached but the atmosphere kicked into top gear from the start.

Ireland started with real intent and the game burst into life in the ninth minute as James McCarthy won possession inside his own half before aiming an ambitious crossfield ball towards Daryl Murphy.

Sloppy defending from the centre-halves allowed Ireland to put together a really quick-paced free-flowing move down the left involving Jeff Hendrick and Wes Hoolahan.

Robbie Brady arrived at pace to deliver a stinging cross to the near post but Bosnia survived the early assault on their goal.

It took 13 minutes for the visitors to get into the Irish final third and, sure enough, it came down the right flank, where they proved so dangerous on Friday night.

Miralem Pjanic linked up well with Edin Visca before cutting in from the right edge of the box but the playmaker was surrounded by green shirts and Ireland scrambled clear.

But then Ireland really took control of the game and camped inside their opponents' half, as the ever-busy Hoolahan started to pull the strings, while Hendrick and Walters were also causing major headaches in the vicinity of the Bosnia box.

A series of free-kicks in and around the area earned Emir Spahic a yellow card for going through Hendrick with his studs raised.

Ireland were unable to really test Asmir Begovic in the Bosnian goal, although the defending was haphazard and a needless throw-in was conceded when Bosnia should have broken from the back.

From the resulting throw-in, Ireland again worked the ball into the box, allowing Murphy to swivel and cut the ball across the face of the goal.

But the cross was blocked by the arm of centre-half Ervin Zukanovic and the referee had no hesitation pointing to the spot, even if replays showed that the defender had little time to get out of the way with his arm in tight to his side.

Walters stepped up, as he did in Warsaw last month, and eyed his former team-mate 12 yards away in the Bosnia goal. 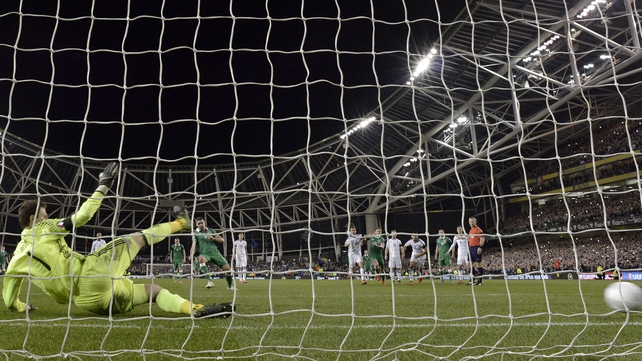 But this time the Ireland spot-kick expert decided to drill it low to the keeper’s right and sent Begovic the wrong way as the stadium erupted with Ireland taking the lead with just 23 minutes on the clock.

Bosnia hit back straight away in Zenica on Friday night and, sure enough, they immediately went in search of an equaliser, with star striker Edin Dzeko bursting into life as he picked up possession on the left edge of the box.

The Roma striker made a yard of space, holding James McCarthy at arm’s length, before drilling a decent effort goalwards. But Randolph was across to cover and was able to let the ball hit the side-netting.

Dzeko again was at the heart of the action in the 34th minute as Bosnia enjoyed their first prolonged spell of decent pressure on the Irish goal.

This time he turned provider, playing a fine knock-down right into the path of Haris Medunjanin, but the midfielder, who has scored a few in this campaign, could not keep his shot down and the ball flew over the bar.

Ireland almost enjoyed more good fortune in the 39th minute when a moment’s hesitation from Begovic almost allowed Hoolahan in for a tap-in.

The keeper took a touch too many and his clearance was blocked by the Ireland attacker but luckily for Begovic the Norwich man had used his hand.

Bosnia maintained their good attacking play, with both Senad Lulic and Visca enjoying time and space on their respective wings, but the final delivery was poor and Ireland took a deserved lead into the break. 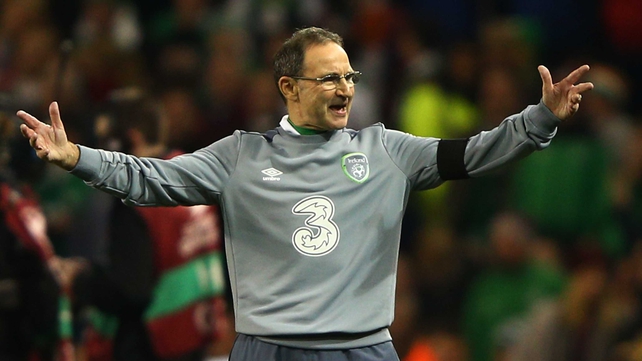 Bosnia again came out with attacking intent, resulting in Ireland adopting a dangerously deep line at the back, but while there was plenty of possession in and around the Ireland penalty box, there was little threat on Randolph’s goal.

Their best chance again came from the right as Visca pulled a great ball back for Lulic, but the Lazio man dragged his shot across the goal.

Ireland boss O’Neill recognised the danger and made a bold statement, sending attack-minded duo Shane Long and James McClean into the fray with just ten minutes of the second half played.

Not surprising, a pumped-up McClean’s first involvement was to earn a yellow card but the West Brom man was probably a little unlucky considering some of the challenges that went unpunished thus far.

Ireland’s counter-attacking option almost paid dividends in the 64th minute as Long, McCarthy and Coleman broke at pace but Bosnia got numbers back to thwart the attack.

And Ireland were gradually regaining the upper hand as McClean showed great commitment to win a corner, before McCarthy won possession on the edge of the box with a perfectly timed tackle; Hendrick then attempted a snap-shot from distance but it never threatened.

The Bosnia coach sensed that Ireland were starting to control the game and again showed signs of panic as he threw man-mountain Milan Duricon in search of an equaliser. 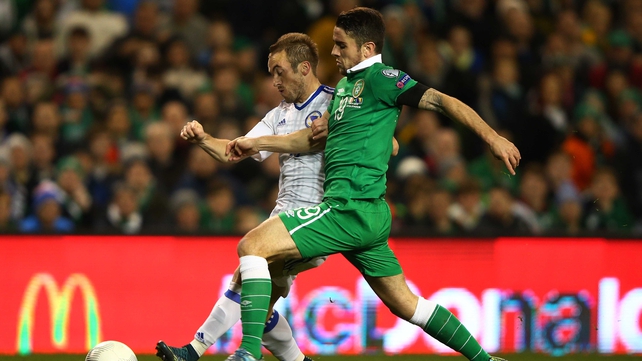 But it was one-way traffic at this stage as Ireland again pushed forward with Walters winning a free-kick deep into the Bosnia half, as he received a kick to the midriff from centre-half Spahic who was very lucky to remain on the pitch.

Brady stood over the free-kick and it must be said that his set-piece delivery over the two legs had not been of the quality that he possesses.

But this time the Norwich City man whipped the perfect ball at pace from the left, which curled the right distance between the goalkeeper and retreating defenders; the corridor of uncertainty as it is called in football parlance.

A lunging Ognjen Vranjes did well to get some purchase on the curling effort but his attempted clearance deflected off the side of his boot, popping up perfectly for Walters who was now loitering with intent at the back post.

Walters was composure personified as he side-footed the volley back across goal and into the back of the net to give Ireland a lead that Bosnia would never recover from. 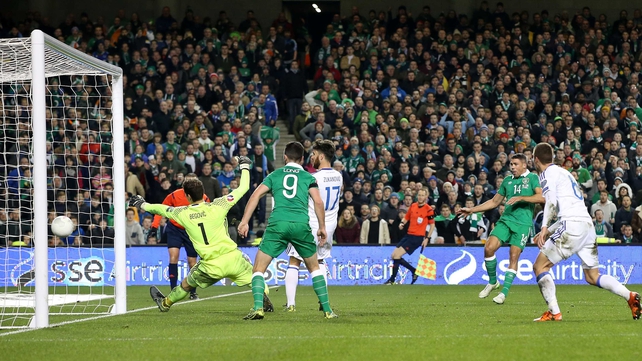 Again Bosnia hit back as Duric and Dzeko launched themselves at a whipped ball from the right but again the Ireland defence held firm, before the follow-up shot from Lulic flew wide of Randolph’s near post.

Another big man, Vedad Ibisevic, was thrown into the melee up front. Bosnia now had three towering centre-forwards on the pitch, but this was bread and butter for the Ireland rearguard, who lapped up everything that was thrown at them.

Long then had a great chance to wrap it up in the 75th minute as he raced clear of the tiring Spahic from a long ball out of defence by Coleman.

The Southampton centre-forward cut in perfectly from the right wing in front of the retreating defender, but just lacked that little bit of composure to slot the ball past the advancing Begovic, who forced Long to clip the ball wide.

More long balls were peppered into the Ireland box, but again the Irish ate them up, happy to concede corners as the clock ticked closer to the 90-minute mark.

Four minutes of injury time had to be endured as Bosnia camped inside the Ireland penalty box and they were almost given a last-minute lifeline when Duric managed to chest the ball perfectly into the path of Ibisevic on the edge of the six-yard box.

The Hertha Berlin striker could not have connected better but the ball cannoned off the crossbar and to safety.

The party atmosphere was already in full flow as the referee eventually put Bosnia out of their misery and Ireland secured their place at Europe’s top table in France next summer.

The moment Ireland qualified for Euro 2016