Former Real Madrid and Spain captain Raul was left with mixed feelings after bringing the curtain down on his 21-year playing career.

The 38-year-old signed off on a winning note on Sunday night when he helped the New York Cosmos clinch the North American Soccer League Championship with a 3-2 victory over Ottawa Fury.

He told he reporters after the match: "I'm happy but it's tinged with some sadness. The decision has been taken.

"My future is in New York, I plan to spend some time with the family and then we'll see"

"It's been a great year at Cosmos, hard but a great experience.

"I'm very proud for everything I did and thank you to the club, my team-mates and the fans for this amazing year."

The veteran forward initially announced he was hanging up his boots in 2014 following a stint with Al-Sadd in Qatar but reversed his decision later in the year before joining Cosmos.

He made 28 appearances and scored eight goals during his time at the club, which culminated in Sunday's title-winning victory.

He said: "It's been a fantastic year. There were ups and downs.

"Soccer is growing in the US and that's a positive thing. There are some good teams in this league and the technical side of the game is getting better too."

Raul has not yet revealed what his next step will be, but he has ruled out making an immediate return to Real Madrid.

He spent 16 years with the Spanish giants, making 550 appearances and held the record for the highest number of goals scored (323) until last month when Cristiano Ronaldo surpassed it.

He won six La Liga titles and three Champions Leagues during his time at Madrid before leaving the club in 2010 for German side Schalke.

Madrid president Florentino Perez on Sunday wrote an open letter lauding club "legend" Raul and said that the 10-time European champions would welcome him back with open arms in the future.

However, Raul, who played over 100 times for his country, has said he is not looking to move back to his homeland any time soon.

"My future is in New York, I plan to spend some time with the family and then we'll see. Real Madrid is my home," he said.

"The club has always had the door open for a return but it's not the time. I need to take a break.

"I think they are top professionals who came in and trained hard every day and their experience has rubbed off on the guys.

"You can't really replace Marcos and Raul and obviously the locker room will be different next year."

Senna spent the main part of his career at Villarreal, scoring 25 goals over his 13-year-spell at the Spanish club before moving to Cosmos in 2013.

After the match he said: "To win next to Raul was an ideal situation. I'm thankful for him being here throughout the year as he made the difference many times and scored many goals.

"In addition, today he didn't get the goal, but he got the assist. He's a player that is a game-changer." 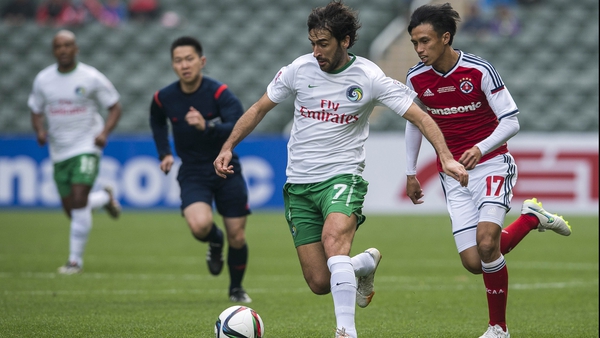 Spain legend Raul set to retire at end of season