Emil Forsberg scored one goal and won a penalty that Zlatan Ibrahimovic converted before Denmark netted late to leave this Euro 2016 playoff in the balance.

The game exploded into life on the stroke of halftime when winger Forsberg swept Mikael Lustig's pass beyond Denmark keeper Kasper Schmeichel.

The crowd had barely taken their seats at the start of the second period when Forsberg was upended by Thomas Kahlenberg after a surging run into the box and Sweden captain Ibrahimovic thundered home the resulting spot kick. 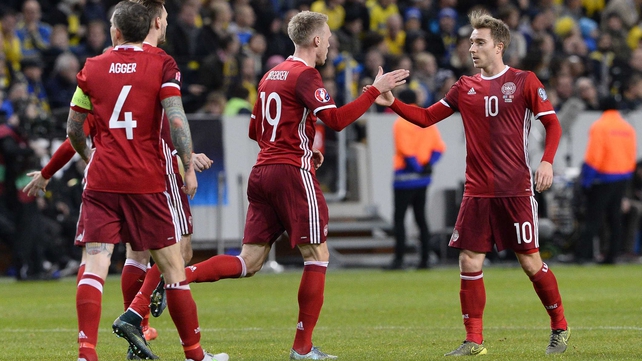 Denmark, who failed to score in their final three group games, created few chances until substitute Nicolai Joergensen stole in at the far post to poke the ball home in the 80th minute and throw his side a lifeline.

With the outside of the Friends Arena lit up in the red, white and blue colours of the French flag, a minute's silence for the victims of Friday's Paris attacks was observed before the game.

Both sides also wore black armbands in memory of the 129 people who died.

Billed as a Scandinavian clash between rival strikers Ibrahimovic and Nicklas Bendtner, the more direct approach of the Swedes paid dividends while the Danes put on a remarkably flat performance until their late goal.

Ibra's strike partner Marcus Berg wasted a number of early chances although Bendtner could have put Denmark ahead before Forsberg's goal when he steered an effort just wide.

Denmark dominated the last 10 minutes but could not find an equaliser. The second leg is in Copenhagen on Tuesday with the winners securing a place in the finals in France. 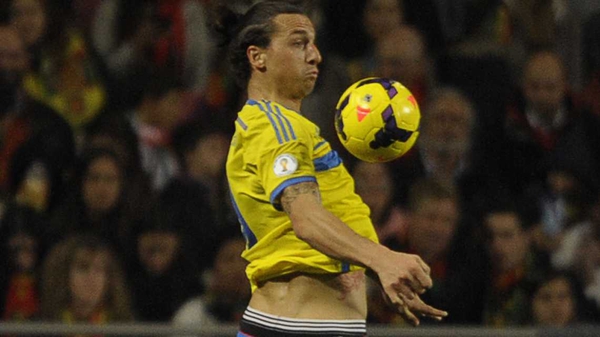