Ireland were five minutes away from an unlikely victory in Friday's EURO 2016 play-off at the Stadion Bilino Polje in Zenica but had to settle for a 1-1 draw due to a late Edin Dzeko equaliser.

The home side enjoyed the majority of possession and chances throughout this exciting play-off clash, but were hit with a real sucker punch as a moment of Robbie Brady magic gave Ireland the lead in the 82nd minute.

But Ireland could not hold on to take an advantage to Dublin on Monday night as star striker Edin Dzeko drilled home the deserved equaliser after some excellent play down the right flank.

Ireland started well and put the home defence under pressure straight away with an early ball over the top. Murphy gave chase but a needless push on Toni Sunjic gave the hosts a free out.

The home side were roared on from the vociferous and passionate capacity crowd and playmaker Miralem Pjanic was quick to stamp his authority on the game, dropping deep to get on the ball early on.

And sure enough, the first chance of the game fell to Pjanic, who found space on the edge of the box and his well-struck half-volley flew just over the bar.

An early signal of intent from the home side as Ireland were starting to spend a lot of time in their own half with Ervin Zukanovic also coming close soon after with a header after some slack defending from a corner in the 15th minute.

Ireland did manage to make their way in the opponent’s final third two minutes later, allowing Brady the chance to send a good delivery into the box from a set-piece on the left flank.

Perhaps it was a sign of what was to come,as Brady had two chances to put the ball into the box but both times failed.

Sure enough, Bosnia started to take control and Brady was then caught in possession by Vedad Ibisevic who broke at pace into the Ireland half with the defenders back-tracking as Bosnia got numbers forward.

Great play across the midfield from Pjanic and Senad Lullic found Edin Visca arriving at pace into the box. The tricky winger tried to take on Ward but decided to go down very easily, looking for the penalty. The referee, who was enjoying a very good game himself, wasn’t interested and waved play on.

Bosnia were really taking over and it was not star-striker Dzeko that was leading the charge but rather strike partner Ibisevic who was causing the Ireland defence all sorts of problems.

An audacious attempt of an overhead kick Ibisevic showed the confidence that was growing within the home team.

And then Visca who was fast becoming the most effective player on the pitch, again, proved too much to handle for Ward and cut down the right and whipped a super ball across the six-yard box.

Ibisevic did excellent work to get across the defender to turn the ball goal-wards but the big striker had to watch his effort fly into the side-netting.

Then in the 28th minute,Seamus Coleman prevented a near certain goal as the Everton defender slid across to prevent Ibisevic flicking the ball into the net from six yards out.

It took 30 minutes for Wes Hoolahan to really get involved in the game and the creative midfielder almost set Glenn Whelan up for a shot on the edge of the box but Bosnia cleared the danger.

Two minutes later, Zukanovic found space at the back post to get a header on target, following some excellent play by Dzeko breaking from his own half, but Randolph was not troubled by the tame effort.

Hoolahan was back involved three minutes before the break after Richard Keogh showed great vision to step into the opposition half and play a great ball forward. Again the Norwich man caused  panic in the Bosnia box, but was unlucky to get dispossessed by the last man.

With half-time approaching, Dzeko swivelled on the edge of the box and made space to get his shot away.

Ward had not being having a great night at left back, but showed his commitment to the cause as he got across to put in an important block as Ireland somehow managed to keep the game scoreless at the half-time.

No changes at the break, but an unwanted pitch invader arrived shortly after the whistle and hung around until full time. The fog made it near impossible to see the entire pitch, though the officials never appeared concerned with the visibility issues.

And Ireland started well as Glenn Whelan had a sight at goal in the opening minute following some excellent play on the left.

But normal service resumed in the 52nd minute as, once again, Visca burst down the right wing.

The winger’s squared ball was almost perfect and all Ibisevic would have had to do was roll the ball into the net but for a wonderful piece of defending from Ciaran Clark who slid back with real intent and averted the danger, inadvertently testing keeper Randolph from close range.

And an almost carbon copy scenario arrived a minute later, as Visca again got played perfectly in down the right. But this time it was Clark’s partner Richard Keogh who closed the gap and cleared the danger.

But Ireland were not fazed and immediately broke up the pitch and another excellent Brady delivery from the left found an unmarked Jeff Hendrick at the back post, but the midfielder’s mis-timed header dropped on to the top of the net.

Despite all Bosnia’s dominance, the Ireland goal was rarely tested, but keeper Randolph was called into action in the 60th minute.

Lulic got on the end of a long cross from the right and while his first effort caused little trouble, the ball was not cleared and found its way back to the Lazio man and this time he tried to clip the ball past the advancing keeper but Randolph spread his body and blocked the shot.

Another Visca snap-shot kept Randolph’s attention in the 72nd minute, before the game really lit up nine minutes later as Brady opened the scoring for Ireland.

A long ball out of defence was mistimed in the air by Edin Cocalic and his backwards header fell into the path of the breaking Brady, almost as it did for Shane Long against Germany last month.

Brady does not possess the speed of the injured Ireland striker but what he lacks in pace, he more than makes up for with skill and the Norwich man showed real class and composure to cut inside the big centre-half and drill the ball home past the keeper at his near post.

The travelling Ireland fans would have had a great view of the goal, despite the thick fog, and their roars confirmed that the ball had actually hit the back of the net.

But the celebrations were short lived as Bosnia hit back within four minutes with another really well-worked move down the right.

This time there was no green shirt to clear the ball into the box and Dzeko showed his class to guide the ball home to level matters.

So back to Dublin on Monday night as this EURO 2016 play-off has reached its half-way point.

The manager said before the game that he wanted the tie to be alive for the second leg. And now with an away goal in the bank, Ireland’s hopes of qualifying for next summer’s showpiece are very much alive. 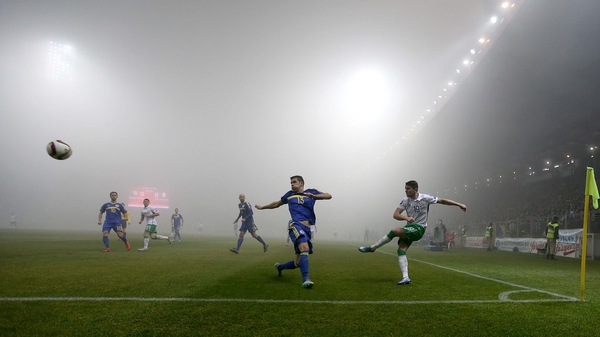 As it happened: Bosnia-Herzegovina 1- Ireland