Robbie Keane insists he does not have to remind manager Martin O'Neill of his goalscoring prowess as the Republic of Ireland head into their Euro 2016 play-off with Bosnia-Herzegovina.

O'Neill has spent much of the build-up to Friday night's first leg being quizzed about the health of striker Shane Long, who will miss the game in Zenica due to the foot injury he sustained during last month's final qualifier in Poland.

Keane started that game on the bench, as he had done at home to Germany three days earlier as first Daryl Murphy and then Long got the nod in a lone striking role.

The 35-year-old is fast approaching the end of his distinguished career, but with 67 international goals to his name he feels his record speaks for itself.

Asked if he needed to remind O'Neill of his potency, the Los Angeles Galaxy striker said with a smile: "I don't think I need to do that. I think 67 goals probably says that a little bit."

Keane has himself been used as a single striker during the current campaign, a task he freely admits does not suit him, but he remains adamant he will happily fill whatever role is required of him in his country's cause.

"I still score goals if I get the opportunities"

He said: "Listen, if I'm called upon anywhere, you want to play. Of course every player wants to play. I haven't played for this long at a high level to be happy not to play.

"But the manager has to make a decision that's right for the team. The team is more important than any individual and if I play or am called upon, I'll be more than ready."

Should Ireland make it to France next summer, the likes of Keane, 39-year-old keeper Shay Given and central defender John O'Shea, 34, who have a staggering 384 caps between them, could be handed the perfect swansong.

If they do not, Monday night's second leg at the Aviva Stadium could very well be the last time one or more of them is seen in an Ireland shirt.

However, Keane for one is not even contemplating that possibility.

He said: "I honestly haven't even thought about it. It's the last thing I want to think about right now. Ask me on Tuesday and I'll have a clearer picture for you. But there's no way I am thinking about it now.

"First and foremost, I'm a player and I still have a lot to offer. I scored 20 goals in 24 games for the Galaxy this year, so it's not like I'm on my way out. I still score goals if I get the opportunities." 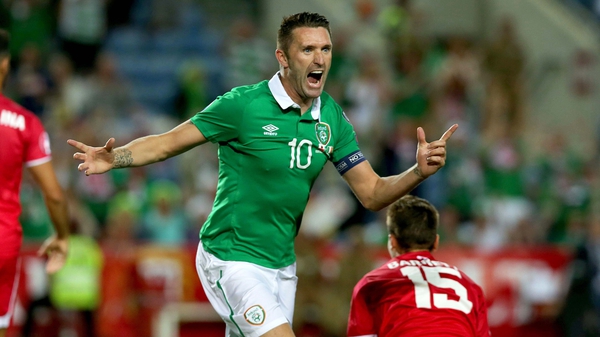 Robbie Keane: Ireland can get a result in Bosnia-Herzegovina