The Hoops and their manager Ronny Deila had been heavily criticised after the 2-1 Europa League defeat to the Norwegian side at Parkhead on Thursday night.

That result kept them bottom of Group A, with qualification hopes damaged most likely beyond repair.

However, there was to be no dismay in Dingwall as a powerful drive from midfielder Tom Rogic in the 38th minute was followed by two goals in a minute after the break from the prolific Griffiths to take his tally to 18 for the season.

Tony Dingwall pulled a goal back for the home side but Celtic midfielder Nir Bitton made it 4-1 to re-establish the champions' six-point lead over Hearts at the top of the table.

There was something of a surprise for the visiting fans who made the long journey north when Carlton Cole was named on the bench.

The 31-year-old former West Ham striker was recently signed by Deila as a free agent and was amongst the replacements along with 18-year-old left-back Kieran Tierney - the latter one of three changes from the Molde game.

County defender Scott Boyd and midfielder Ian McShane came in for the injured Andrew Davies and Craig Curran, the latter starting among the substitutes.

The Staggies had the first real chance in the eleventh minute but striker Liam Boyce headed a cross from left-back Richard Foster past the near post when he ought to have tested Hoops goalkeeper Craig Gordon.

Forrest then drove wide from the edge of the box after being set up by Rogic and the Australia midfielder lashed a shot over the bar before midfielder Stuart Armstrong headed a Mikael Lustig cross over the bar.

However, just as the match began to become rather pedestrian, Rogic took a pass from stand-in skipper Lustig and fired in a left-footed drive from outside the box which gave County goalkeeper Gary Woods no chance.

Celtic threatened to stretch their lead further but survived a let-off a minute from the end of the first half when Staggies skipper Jackson Irvine, a former Celt, failed to connect with a Boyce pass while in a good position.

There was less than a minute of the second half played when Boyce played in McShane, but a heavy first touch allowed Gordon to thwart him, with the ball going behind for a goal-kick.

At the other end, Woods dived to his left to make a fine save from Griffiths, but he had no chance in the 54th minute when the Scotland striker made some space for himself before curling a shot into the corner.

The Hoops fans had not stopped celebrating when Griffiths was picked out by Forrest following a driving run from the winger, and he gleefully smacked the ball into the net from 12 yards.

County went for broke and Dingwall pulled a goal back in the 59th minute with a powerful drive from 12 yards to give the home side some encouragement, and only a brilliant save 10 minutes later by Gordon prevented Irvine's close-range header reducing the deficit further.

But when Bitton headed in an Armstrong corner in the 75th minute it allowed the Parkhead men to see out the rest of the match in comfort.

They finished with 10 men in the final stages as Forrest went off after all three substitutes had been used. 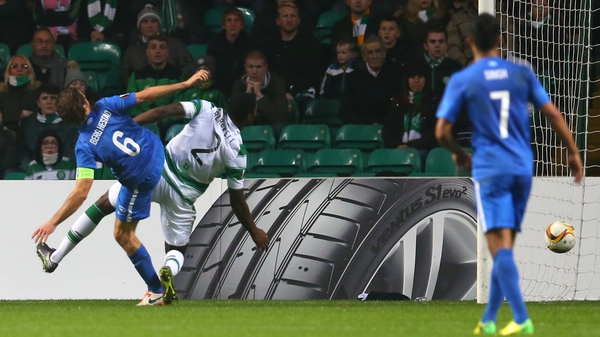