Even if he wins Sunday’s FAI Cup final, Cork City boss John Caulfield says it may take some time before he can enjoy the experience.

The Leesiders take on double league champions Dundalk looking to win the famous trophy for the third time.

It will be the Munster side’s first appearance at the new Lansdowne Road, having lifted the trophy in 2007 after a 1-0 win over Longford at the RDS.

Asked if it was possible, as a manager, to enjoy the Aviva occasion, Caulfield told RTÉ Sport: “I suppose if I’m being honest with you, maybe in 20 years’ time.

“If you’re alive looking back on the occasion you might say it was a good occasion but I don’t think you enjoy anything as a manager unless you win.

“When it gets to a cup final it’s a different type of occasion – it’s a once-off, it’s the Aviva, all the supporters get out in big numbers.

“There’s an added pressure because the coverage is so big compared to a league match so it changes the dynamics a little bit.

“If players lose focus and you start listening to yourself and reading articles about yourself, you start daydreaming. If that happens then your focus is somewhere else and then you’ve no chance.

“From my point of view it’s about keeping them training, similar to the way we train, keeping the lads focussed, trying to keep their head on it.

“Embrace the hype, because Cork is fantastic, the support around [is great] and everyone is carried away but embrace it but certainly don’t let it distract you because if it distracts you, we’ve no chance.”

As a Cork player Caulfield lost two finals, in 1989 to Derry and in 1992 to Bohemians, before claiming the prize when they beat Longford eight years ago.

He admits his side, who will monitor the fitness of Liam Miller and Colin Healy ahead of the game, go in to the tie as underdogs.

“They’ve won the league for the last two years. The majority of people expect them to win the double and if you look at the goals they’ve scored, it’s easy to see why people would tip them," he said.

“Our last two matches with them we’ve had two draws, we’ve been behind in both games and we’ve come back.

“There are areas we feel we can cause Dundalk problems. 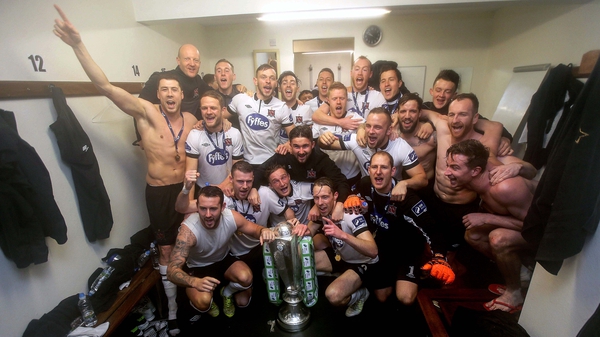