Goalkeeper Jack Butland was the hero as Stoke left Newcastle with a hard-earned point as the Magpies once again failed to make the most of their chances.

Butland made two second-half saves from Moussa Sissoko, including a stunning effort with seven minutes remaining, and others from Ayoze Perez and substitute Jamaal Lascelles having needed the help of a post to deny Aleksandar Mitrovic before the break in front of a crowd of 47,139.

He more than anyone prevented Steve McClaren's men from securing the win they needed to ease the pain of their derby defeat at Sunderland, and they remain deep in trouble with only one Premier League win to their name so far this season.

McClaren was looking for a swift response to last Sunday's defeat at the Stadium of Light, a game his side dominated before two crucial refereeing decisions went against them, and they started in positive fashion. However, with Stoke offering more than the Black Cats had in the opening 45 minutes, it proved a frustrating first half with clear-cut chances at a premium.

Both sides were careless in possession as wide-man Marko Arnautovic caused problems for the hosts, while Perez was at the centre of much of Newcastle's better work.

However, it was fellow striker Mitrovic who came closest to breaking the deadlock, forcing Butland into a fourth-minute save and Ryan Shawcross into a hurried clearance before Philipp Wollscheid blocked his shot.

But the Serbia international was unfortunate not to open the scoring when he climbed highest to meet Sissoko's 28th-minute cross and glance a header past Butland's despairing dive, only to see the ball come back off the inside of the post.

For their part, Stoke created little of note despite enjoying a fair share of the possession, although had defenders Chancel Mbemba and Fabricio Coloccini or striker Jonathan Walters managed to get a touch to Charlie Adam's driven cross, they might have taken a 17th-minute lead.

Perez sent a curling effort just wide after linking well with Mitrovic and Georginio Wijnaldum three minutes after the restart, and the Dutchman tested Butland with a 50th-minute free-kick after Glenn Whelan had tugged his shirt.
Magpies keeper Rob Elliot did well to repel Walters' header at point-blank range after Arnautovic had been allowed to cross from the left, but the home side were building momentum.

Butland came to Stoke's rescue when he blocked Sissoko's 55th-minute shot after he had exchanged passes with Wijnaldum and Chancel Mbemba headed just wide from the resulting corner, and the keeper managed to beat away Perez's shot after the home side launched a pacy break.

Mitrovic and Wollscheid were both booked as their running battle boiled over with 64 minutes gone with the game descending into something of an arm-wrestle.

Butland managed to tip away Sissoko's stinging 83rd-minute drive and Lascelles' bullet header with three minutes left to preserve his clean sheet as the Magpies came up agonisingly short. 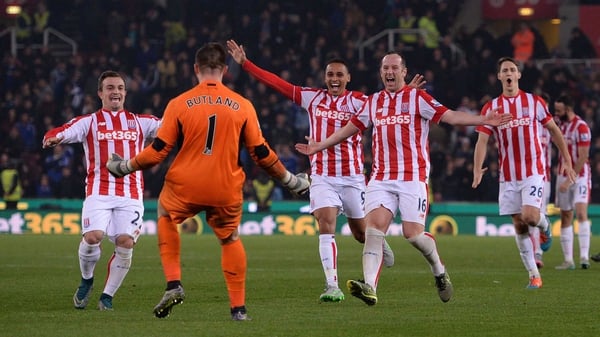 Stoke pile the pressure on Mourinho with victory over Chelsea