Wayne Rooney and his Manchester United team mates may be trying too hard to score goals, according to manager Louis van Gaal.

United have scored the lowest number of goals among the top six clubs in the Barclays Premier League this season, with England captain Rooney scoring just two.

Van Gaal suggested it might be a mental block affecting Rooney and the other United players rather than a lack of chances.

The Dutch man used the example of Mario Gomez during his time at Bayern Munich, who scored around a goal a game despite only having an average of nine touches in a match.

Rooney had around 50 touches of the ball last weekend against Manchester City - his average number this term.

"Players are human beings and they want to score goals but maybe they want it too much and maybe then the choices are not always good," said van Gaal.

"Maybe he (Rooney) is doing too much, because you never know as a player how you can improve your shape or your finishing. It can also (create) a lot of doubt and I try to influence that.

"But it can be too hard and then your mental state shall be a little bit less and that has an influence on everything and that's the most difficult thing as a manager and player to cope with.

"When I was manager of Bayern Munich, the striker was Gomez and he touched the ball nine times on an average in a game - the highest 14 touches - but he scored every game.

"I don't think our strikers touch less the ball - it's how the balls are coming to him, how he decides, how quick he is in dealing with the situation." 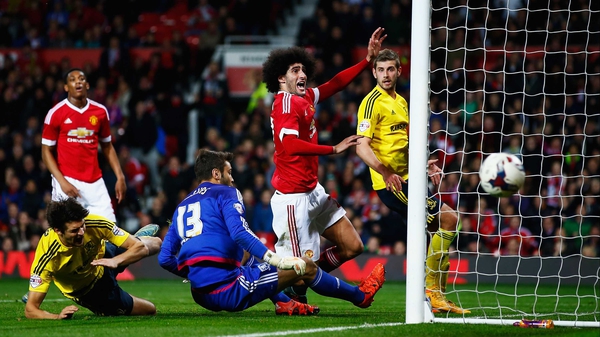