Rafael Benitez's side saw off Levante 3-0 on Saturday afternoon to go top of the standings, and they were joined on the 18-point mark by arch rivals Barca in the evening after Luis Enrique's champions overcame Rayo Vallecano 5-2.

Ronaldo hit his 324th goal in 310 games for Madrid just three minutes after Marcelo had given the hosts the lead midway through the first half, moving ahead of Raul as the club's leading marksman.

Although Levante had made a positive start to the game, Ronaldo's strike gave Madrid a convincing lead going into half-time, and substitute Jese rounded off the win late on with a terrific individual goal to take Los Blancos to the summit of La Liga. 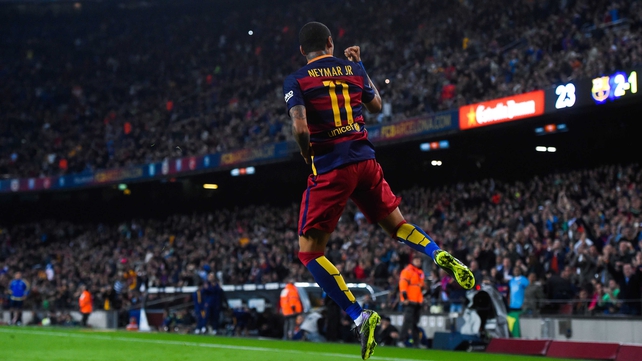 At the Nou Camp, a couple of hours later, Ronaldo stepped up to the plate in style for Barcelona when charged with the task of stepping into the boots of the absent Lionel Messi.

Rayo took a shock lead on 14 minutes through Javi Guerra, but Neymar turned the game on its head by winning and scoring two penalties before half-time.

The visitors squandered a couple of chances to level in the second half and were made to pay by the Brazilian, who scored twice more in the space of a minute and then laid on a classy cross for Luis Suarez to bag the fifth. Rayo's Jozabed hit a late consolation goal, but it was very much Neymar's night.

Also on Saturday, Sevilla came from behind to salvage a 1-1 draw at Eibar - but their unconvincing away form should concern them heading into Wednesday's Champions League visit to Manchester City.

Borja Baston gave in-form Eibar an early lead but the mid-table Andalusian visitors improved in the second half and drew level through Kevin Gameiro's close-range effort on 71 minutes.