On a dramatic final night of qualifying, Turkey and Croatia claimed the last two remaining automatic berths for Euro 2016 while Bosnia-Herzegovina, Norway and Hungary went into the play-offs.

Holland, champions in 1988, needed to beat the already-qualified Czech Republic at the Amsterdam Arena and also for Turkey to lose to Iceland in order to snatch third place in Group A away from the Turks.

However, last year's World Cup semi-finalists saw a miserable qualifying campaign end in failure and ignominy as the Czechs claimed victory - and top spot - despite the loss of Marek Suchy to a red card just before half-time.

The Czechs were already leading 2-0 through goals from Pavel Kaderabek and Josef Sural when Suchy got his marching orders, and then a Robin van Persie own goal in the 66th minute put the visitors 3-0 up. The Dutch managed to avoid total humiliation with goals from Klaas-Jan Huntelaar and Van Persie, but they were nothing more than consolations.

The result would not have mattered in the end anyway, as Turkey beat Iceland 1-0 to not only help eliminate Holland but also dramatically clinch an automatic qualifying berth for themselves. 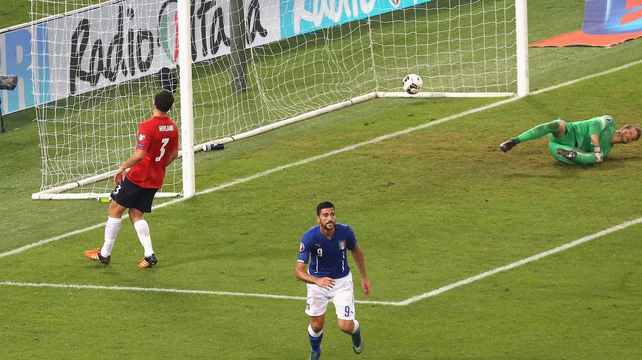 Turkey's hopes looked to be over when Gokhan Tore was sent off in the 78th minute but Selcuk Inan's last-gasp goal earned them the win over Iceland and, with Kazakhstan beating Latvia 1-0 courtesy of a 65th-minute Islambek Kuat goal, also saw them pip Hungary to finish as the best third-placed team.
Hungary, who were not in action, go into the play-offs.

There was also drama in Group H, where Italy fought back from a goal down to beat Norway 2-1 and clinch top spot with Croatia leap-frogging the Norwegians into second with a 1-0 win over Malta.

Norway were on course to finish top themselves when Alexander Tettey gave them a 23rd-minute lead in Rome, but late strikes from Alessandro Florenzi (74) and Graziano Pelle (82) saw the already-qualified Azzurri win the group.

And to add to Norway's disappointment, they dropped to third and into the play-offs after Croatia - having started the day in third - beat rock-bottom Malta with a first-half goal from Ivan Perisic.

In Group B, Belgium and Wales finished one-two following respective homes wins over Israel and Andorra, with Bosnia-Herzegovina taking third place behind them. 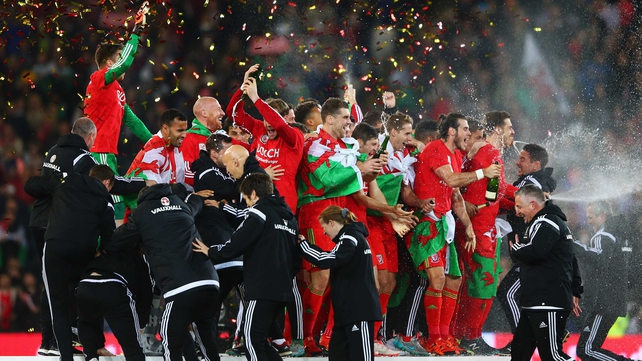 Belgium, who like Wales had already secured their berth in France, were 3-1 winners over Israel thanks to goals from Dries Mertens, Kevin de Bruyne and Eden Hazard.

Israel pulled a late goal back through Tomer Hemed but their hopes of a play-off berth were over, with Bosnia-Herzegovina sealing that spot with a 3-2 win over Cyprus in Nicosia.

Haris Medunjanin (two) and Milan Djuric were on the mark for the visitors with Constantinos Charalambidis and Nestoras Mitidis responding for Cyprus.

Wales, meanwhile, celebrated reaching their first major final in 58 years with a 2-0 win over Andorra thanks to second-half goals from Aaron Ramsey and Gareth Bale.