Holland will not feature at Euro 2016 after a 3-2 defeat to the Czech Republic ensured a miserable qualifying campaign ended in failure.

The Dutch knew only victory would do in the Amsterdam Arena and even then they needed third-placed Turkey to lose to Iceland to clinch third place themselves and a play-off spot in Group A.

Goals from Pavel Kaderabek and Josef Sural, however, put the Czech Republic 2-0 up inside half an hour and while the visitors were reduced to 10 men when Marek Suchy was sent off before half-time, Holland failed to capitalise.

Instead, Robin van Persie, on as a substitute in the 38th minute, headed home an own goal to put the result beyond doubt, before Klaas-Jan Huntelaar and Van Persie scored late consolations.

It is the first time Holland have failed to qualify for a major tournament since they missed the 2002 World Cup and attention will swiftly turn to the future of head coach Danny Blind.

The Royal Dutch Football Association insisted the 54-year-old would remain in charge regardless of the team's fate but pressure is sure to mount, with Southampton boss Ronald Koeman a potential alternative. 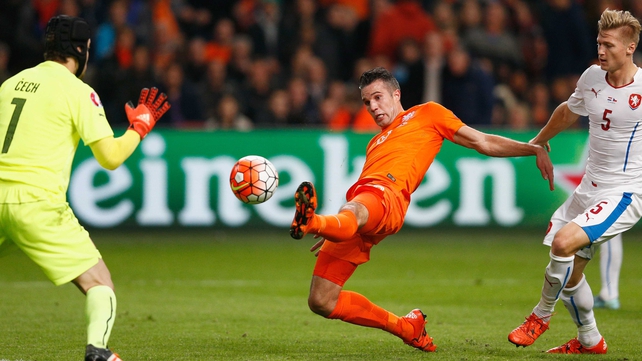 Blind's side began with the gusto of a team who believed and Anwar El Ghazi should have opened the scoring within 40 seconds when he was slid in down the right-hand side, but he drilled straight at the keeper when he had time to carry the ball closer.

The Czechs struggled to gain a foothold and they were spared again soon after when El Ghazi's low cross found the incoming Wesley Sneijder, but he ballooned the ball over the crossbar.

As threatening as they were going forward, Holland were jittery at the back as goalkeeper Jeroen Zoet fumbled the ball amidst a crowd of players and was relieved to see Theodor Gebre Selassie prod over from close range.

The warning signs went unheeded, however, as the Czechs stunned the home crowd by breaking the deadlock in the 24th minute as a neat flick from Suchy allowed Jiri Skalak to feed Kaderabek, who lifted the ball past Zoet at the near post.

There was worse to come for the home side, whose defensive frailties were again exposed 11 minutes later when a simple throw-in found its way to Sural, who ghosted past Virgil van Dijk before poking the ball into the net for a two-goal lead.

Immediately, Van Persie was thrown into the fray and hopes of a comeback increased when Suchy was sent off just before the break, after bringing down Memphis Depay when the forward appeared to be in on goal.

Instead, however, it was the Czechs who piled on the misery in the second period as Van Persie, on to inspire a fightback, killed it off in the 66th minute when his cushioned header back flew straight past Zoet for an own goal.

There was a late rally as Huntelaar powered home a header and then Van Persie went some way to making amends with a close-range finish.

But it was too little, too late and as news filtered through that Turkey had snatched a late victory against Iceland, the Dutch knew their time was finally up.