World champions Germany and perennial also-rans Albania do not share much in common in soccer but both were united in joy on Sunday when they qualified for Euro 2016 in France along with Romania and Poland.

The World Cup winners, who have lifted the Henri Delauney trophy three times as European champions, left it late but sealed their spot with a 2-1 win over already-eliminated Georgia which gave them top spot in Group D.

Albania, who have never previously reached the World Cup or European Championship since first entering both in the mid-1960s as a secretive state shrouded in hard-line communist aloofness, secured their place with a 3-0 win over Armenia in Yerevan.

Thousands of their supporters in both Albania and Kosovo, where a number of the Albania players were born, took to the streets, letting off fireworks and driving around towns and cities hooting their car horns in celebration.

Romania also secured their berth in France when they won 3-0 in the wintry Faroe Islands to secure second place in Group F behind already-qualified Northern Ireland.

Romania's victory lifted them to 20 points, one behind the Irish who finished on 21 after a 1-1 draw in Finland, leaving Hungary in third spot with a place in the playoffs. 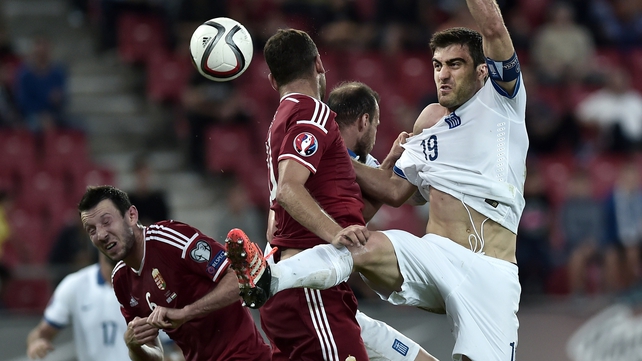 Sixteen teams, including hosts France, are now assured of a place in the expanded 24-team finals.

Along with the four who qualified on Sunday, Iceland, Czech Republic, Belgium, Wales, holders Spain, England, Switzerland, Northern Ireland, Austria, Italy and Portugal are also through.

Six teams are sill in contention for automatic qualification: Slovakia and Ukraine from Group C, Russia and Sweden from Group G, and Norway and Croatia from Group H.

The marathon week of qualifiers continues on Monday and Tuesday with another 18 matches after which 20 finalists will be known, including the team that has qualified with the best record from the third-placed finishers in he nine groups.

The other eight third-placed teams enter the two-legged playoffs to be held in November, with the draw for those matches scheduled for next Sunday.