Dundalk midfielder Richie Towell has been named the SSE Airtricity/Soccer Writers’ Association of Ireland Player of the Month for September.

Incredibly, it is the fourth time that Towell has won the award.

Towell bagged six goals over the month as Dundalk look set to retain the title and the Lilywhites could wrap things up with a win against Shamrock Rovers in Tallaght on Friday.

Towell admits it has been a great season for him personally and hopes his side can win the title on Friday so that they can start preparing for the FAI Cup final and trying to secure a double.

"I’m expecting a baby in a few weeks so it’s been unbelievable. Things are going really well for me at the moment and hopefully we can end the season well"

The 24-year-old said: “How well we’re doing as a team is unbelievable and to get a personal award is always nice too. I was lucky enough to score a couple of goals over the month so I was delighted.

“We have a lot to look forward to with the cup final and closing in on the league. Hopefully I can get a few more goals before the end of the season.

“It will be nice no matter where we win it. We want to win it as soon as possible and it just so happens that it is against Rovers up in Tallaght.

“Hopefully we bring a good crowd and put on a good show with the game on TV too. The double is something we set out to do at the start of the season.

“We see very high standards for ourselves and winning back-to-back titles is really hard but it is something we are on course for now.

“I haven’t had a trip to the Aviva since I’ve been in the league so it’s nice to end the season with some big games.”

Towell reckons this has been the best season of his career and now wants to end it on a high.

“It’s been a great season for us as a club and for me personally on and off the pitch it’s been brilliant,” he added.

“I’m expecting a baby in a few weeks so it’s been unbelievable. Things are going really well for me at the moment and hopefully we can end the season well.”

In winning the award, Towell fended off competition from Wexford Youths striker Danny Furlong who finished second in the voting with Towell’s Dundalk team-mate Ronan Finn in third. 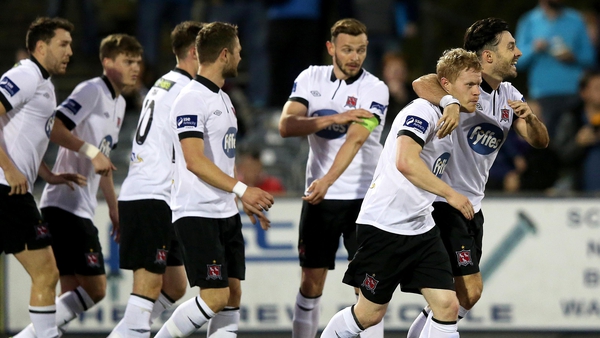