The Republic of Ireland can lose to both Germany and Poland and still reach the EURO 2016 play-offs but Robbie Keane says the team can’t afford to be thinking of events in Glasgow tomorrow evening.

Martin O’Neill’s men face the world champions at the Aviva Stadium at the same time as Poland visit Hampden Park to play Scotland.

A win for the Poles would end the Scots’ qualification hopes for France next year, secure second place in Group D and put Ireland into a play-off spot.

The Boys in Green are hampered by injury and suspension. Full-back Seamus Coleman is definitely out but may play on Sunday in Warsaw; midfielders Glenn Whelan and James McClean miss out after an accumulation of yellow cards.

Joachim’s Low’s men got off to a slow start, suffering something of a World Cup hangover, but have hit their stride recently and need just a point tomorrow evening to cement their place in next summer’s event.

Keane acknowledged that the crowd at an expected sold-out Landsdowne Road will be keeping an eye on events in Glasgow.

“We can’t help what happens up there,” the LA Galaxy striker told reporters.

“We can’t dictate what’s happening in Glasgow so we’ll just have to focus on us. I’m sure the crowd will be on their phones and checking the results.

“It’s certainly important that the players make sure that we’re fully focussed on our job in hand.”

Should Scotland win or draw, it means that Ireland will almost certainly need two or more points from the remaining games with Gordon Strachan’s side facing Gibraltar in the last round.

Keane, who will equal Germany legend Gerd Muller’s international goal-scoring record of 68 should he find the net tomorrow, flew in from LA in a “joyful” mood having welcomed a new baby to his family and scored in the MLS.

“I’m always ready to go. I wouldn’t be here if I wasn’t,” the 34-year-old, who was substituted at half-time in the 1-0 win over Georgia last month, said.

It is not clear if the former Spurs and Celtic striker will start for the 7.45pm kick-off (live on RTÉ2) but O’Neill was keen to talk up Keane’s enthusiasm for the shirt, more notable coming in the aftermath of the Jack Grealish saga.

“I think he epitomises [the spirit] here,” said O’Neill.

“He’s made a journey across half the world to play in a match here at his particular age. He’s not 26 or 27. He’s in the latter stages of his career. He still wants to don the shirt.

“He still wants to be part of a situation here where we can qualify for one competition, which might be a swansong for him. And I think that that is there in abundance.” 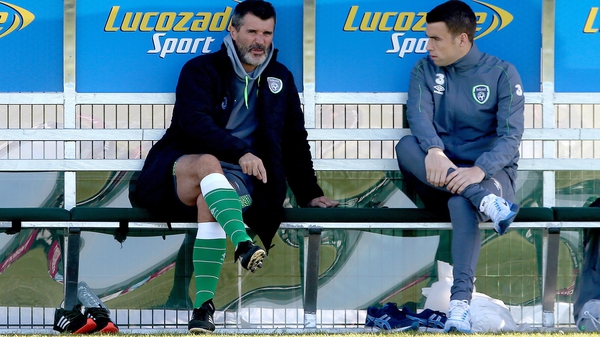