Substitute Luciano Vietto netted a late equaliser to help Atletico Madrid salvage a 1-1 draw against Real Madrid and prevent their bitter rivals from going top of the Primera Division.

Real, who had won just once in their last eight meetings with Atletico and lost this corresponding fixture last season 4-0, took the lead after just eight minutes through Karim Benzema's header.

A derby victory would have lifted Real to the division summit but - on a weekend where none of the top six managed to win - they were denied when Vietto slotted home Atletico's equaliser from close range six minutes from time.

Vietto's first goal for the Rojiblancos saved the blushes of Atletico forward Antoine Griezmann, who had seen a first-half penalty saved by Neylor Navas.

The result at the Vicente Calderon means Villarreal remain pacesetters in La Liga despite suffering their first defeat of the season on Sunday, the Yellow Submarine going down 1-0 to lowly neighbours Levante.
Villarreal had picked up 16 from a possible 18 points going into the game while Levante had just three points to their name and propped up the table.

However it was the underdogs who deservedly claimed the points, taking advantage of Villarreal defender Bojan Jokic's first-half dismissal to clinch the win through Deyverson's fine late volley.

It was not such a good day for Levante's city rivals Valencia, who surrendered an early lead to lose 3-1 at Athletic Bilbao. Dani Parejo put the visitors ahead after 19 minutes with a stunning free-kick but his side's advantage lasted little more than 10 minutes, ended by Aymeric Laporte's close-range header.

Athletic were galvanised by the equaliser and swept their opponents away after the break, taking the lead for the first time through Markel Susaeta on the hour mark and former Valencia striker Aritz Aduriz sealed the three points not long after.

Athletic's win lifts them onto seven points, two behind Valencia who had looked to be turning a corner after back-to-back victories over Granada and Lyon.

Also on Sunday, Ruben Castro scored one goal and set up another for Heiko Westermann as Real Betis beat Rayo Vallecano at the Vallecas Stadium for the first time since 1999, the visitors running out 2-0 winners.

On Saturday, Barcelona lost their first Primera Division match since Lionel Messi's injury as they slipped to a 2-1 defeat to Sevilla in a riveting game at the Sanchez Pizjuan.

Michael Krohn-Delhi gave the hosts the lead after 52 minutes and Vicente Iborra increased the advantage six minutes later, capitalising on awful defending from the Catalans.

Neymar pulled one back for Luis Enrique's side but, despite dominating the latter stages and hitting the woodwork three times over the course of the game, the champions could not find an equaliser and fell to a second straight away defeat.

A hat-trick from Brazilian striker Charles saw Malaga defy the second-half dismissal of Fernando Tissone to beat Real Sociedad 3-1 and get off the winning mark this season.

A second-half equaliser from Piti rescued a point for Granada and denied Deportivo La Coruna a third straight league win.

A last-gasp winner from Alex Menendez saw Sporting Gijon beat Espanyol 2-1 and pick up their second win of the season.

The winger restored the visitors' lead in stoppage time after Felipe Caicedo had cancelled out Alen Halilovic's first-half wonder-goal, taking Sporting up to 10th place in the table, just one point behind the Catalans.

Eibar claimed their first league win since 30 August with a 2-0 result at Las Palmas. 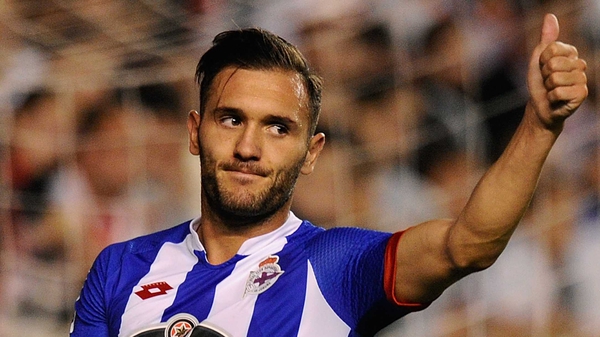