Danny Morrissey scored the only goal of the game as Cork City booked their place in the Irish Daily Mail FAI Cup final.

Striker Morrissey capped a rare start with a second half winner at the Carlisle Grounds as John Caulfield’s Leesiders set up a date with Dundalk at the Aviva Stadium on 8 November.

Though second best for good spells of the game, Bray battled to the death and might have forced a replay but for a terrific late stop from Cork keeper Mark McNulty from Wanderers’ substitute Emeka Onwubiko.

Even allowing for both sides missing key players due to suspension or their being cup-tied, both managers sprung surprises in their team selections.

Bray boss Mick Cooke opted to start the inexperienced Adam Wixted and Luke Fitzpatrick, the latter making his first start of the season, in his midfield.

Cooke's opposite number, Caulfield, also raised an eyebrow or two with both Michael McSweeney and Mark O’Sullivan only making the bench as Darren Dennehy came back into central defence and Morrissey started up top.

In a lively start to the game, it was Cork who had the first sniff of goal with Darren Dennehy glancing his header wide from Liam Miller’s corner inside two minutes.

But it was Cork’s McNulty who was the first keeper in action as he got down smartly to hold a low drive from Adam Hanlon from Wixted’s low cross from the left.

Bray’s Peter Cherrie was then well placed at his left-hand post at the other end within a minute to gather Morrissey’s volley after the City striker had latched onto a ball over the top.

Cork, though, really should have taken the lead on 26 minutes with the move of the first half.

Billy Dennehy’s sublime ball in behind put Ross Gaynor through on goal. 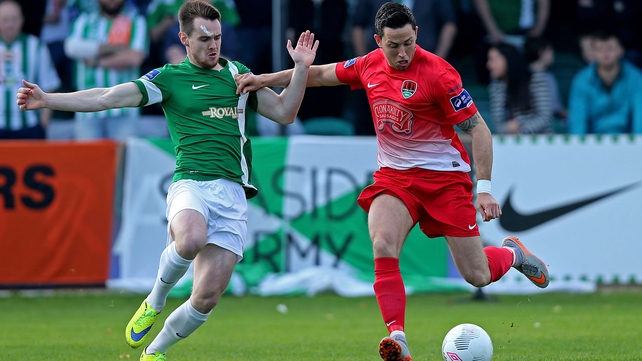 Cherrie did well to parry the City left-back’s shot. But the danger remained as Karl Sheppard got possession, got the ball onto his right foot, only to contrive to shoot over the bar from 10 yards for what was a bad miss.

Bray countered immediately with Ryan McEvoy also failing to keep his shot down after Chris Lyons did well to set him up with a cross from the left.

The ball was in the Bray net on 36 minutes, but Sheppard was flagged offside before he had setting up Morrissey to tap in.

If somewhat cagey, Cork remained the better side into the second half, carving another good chance six minutes in.

Birthday boy Alan Bennett dinked a fine ball over the top for the run of Morrissey down the inside right channel. The  finish was poor, though, as he shot wide when he should have hit the target.

When they did get an effort on target, from the influential Garry Buckley’s bouncing volley from Gaynor’s cross, Cherrie showed his reflexes to tip the ball over the his crossbar.

Their confidence having steadily built, Cork duly took the lead for what would prove the crucial goal on 59 minutes.

McNulty’s long clearance appeared to get a flick on from Buckley. Morrissey raced through to beat the out-rushing Cherrie to the ball to force it to the net, injuring himself in the process.

Well on top now, Cork were deprived a second goal on 71 minutes by yet another fine save from Cherrie, who tipped over substitute John O’Flynn’s header from Buckley’s fine left wing cross.

Bray rallied late on. Bennett made a telling block from a Lyons shot before Graham Kelly was narrowly wide with a drive from distance.

Onwubiko should then have levelled on 88 minutes but his close range volley from fellow substitute Peter McGlynn’s cross was brilliantly parried away by McNulty. 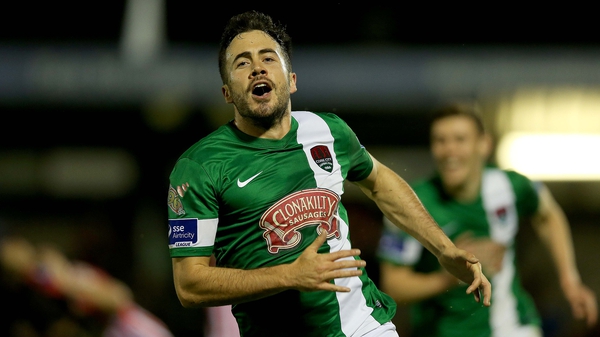