Shamrock Rovers manager Pat Fenlon has said his side are aiming for second place after leaving it late to beat Bray Wanderers in the SSE Airtricity League at Tallaght Stadium on Tuesday night.

Speaking to RTÉ Sport after the 1-0 win, Fenlon said: "It wasn't pretty, that's for certain, but it is a big three points for us."

Fenlon added that he wasn't too worried about the performance after a Brandon Miele free-kick saved Rovers' blushes.

"I’ve said it about our home games, we’ve got to try win them and put pressure on the other clubs around us."

Leaders Dundalk sit 15 points clear of Rovers with only five games remaining, so the Hoops boss said that his side are aiming to overhaul Cork in second place, as the Dublin side look to keep their European push alive.

"We're still looking at second, that’s where our target is at the moment. We've got five tough games left, so have Cork, and we've got to keep going."

"We're disappointed we're not in the shake up to win something at the end of it, but we've got to make sure we get to Europe" - Pat Fenlon

Cork are currently four points clear of Rovers, with a game in hand, but Fenlon believes that his side can make up the deficit.

"We've got another home game on Friday, which if we can win it, gets us a bit closer to teams ahead of us.

"We're disappointed we're not in the shake up to win something at the end of it, but we've got to make sure we get to Europe."

The Hoops boss is not worried that the lack of silverware on offer will cause his players to suffer from a lack of motivation.

"It shouldn't be a problem, there are a lot of players out of contract so we need to be getting into Europe to maintain what we have."

The former Hibs manager was also full of praise for his opponents, who have made themselves hard to beat of late.

"They're a good side; I think they’ve only conceded four or five goals in about nine or 10 games.

"Since Mick [Cooke] came in they've been compact, nice and tight. They've got some good players as well.

"It's like everything, everybody thinks teams will come here and roll over; they come here and make it difficult for us and counter attack really well. 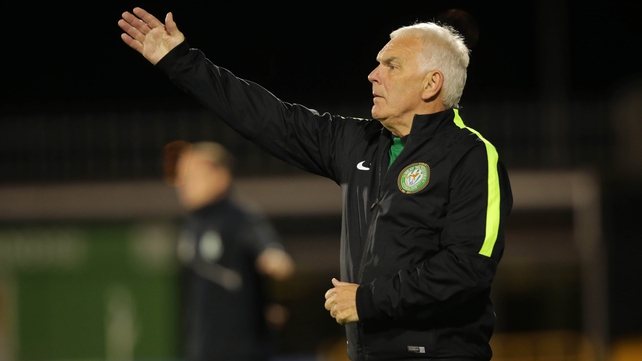 Despite conceding late, Cooke was pleased with the performance from his side.

"I think in the overall context of 90 minutes, Rovers had a lot of the ball, but didn't hurt us and I think, with the chances we missed, we should have been ahead in the game.

"We conceded a free with two minutes to go and had a great chance to equalise in injury time – we definitely threw away a point, if not three.

"I'm very pleased with the overall performance, I thought we couldn't play any better.

"The lads are obviously very disappointed, but we have to bounce back and we have a very important game in Sligo on Saturday night."

Bray find themselves in sixth place, clear of the relegation dog fight at the foot of the table, and also have an FAI Cup semi-final with Cork to look forward to.

"We want to finish in sixth position, I think we warrant that position in the league – we've only lost to the teams in the top four by one goal.

"We look forward now to Sligo - get the three points there and we can relax and look forward to a cup semi-final."

Cooke did, however, admit that goals are proving hard to come by for the Seagulls, but is hopefully they can change that by the end of the season.

"You see the chances we missed, goals are a problem.

"We are creating chances, we're just not taking them and someday we'll give somebody a right hiding, 2-0 or something."