Anthony Martial wasted no time writing himself into Manchester United folklore as he stepped off the bench to score a stunning winner on debut against Liverpool.

Twenty-one minutes after his introduction, the £58million deadline-day signing turned Martin Skrtel twice before rolling the ball past Simon Mignolet to wrap up a 3-1 win for Louis van Gaal's side.

Christian Benteke had found the net with an acrobatic and arguably superior goal moments earlier, but Martial will grab the headlines after his maiden strike.

Much has been made of the record fee United paid Monaco for the 19-year-old forward, but he could not have made a better start to his United career.

This will not go down as one of the classic encounters in this world-renowned fixture, but Van Gaal will not care.

After a week dominated by reports of dressing-room unrest and criticism of his transfer policy, the United manager will be ecstatic at having recording a third straight win over the club's most bitter rivals.

United, who recalled goalkeeper David de Gea, lacked a cutting edge in the first half, but Ashley Young's introduction changed the game. He won the free-kick which Daley Blind stroked home, and Ander Herrera rifled in a penalty before Benteke and Martial struck with two stunners.

Van Gaal was all smiles, but his opposite number Brendan Rodgers was taunted with chants of "you're getting sacked in the morning" as he walked off the pitch after his second straight defeat.

United - not that it needed it - added to the theatre of the occasion before the match by reading De Gea's name out last from the team-sheet last, which led to a huge round of applause.

There was little to applaud thereafter, however, as Old Trafford played host to one of the dullest halves in recent memory.

With Marouane Fellaini up front instead of the injured Wayne Rooney, United looked toothless.

Hopes were raised when Mignolet's poor clearance deflected off Juan Mata into Fellaini's path, but he shot high and wide. The Belgian wasted another two chances before half-time.

Van Gaal had seen enough. He brought Young on for Memphis Depay and the winger made an immediate impact, drawing a foul from Nathaniel Clyne on the edge of the box.

Mata squared the ball to the unmarked Blind and he curled a sublime finish into the corner.

De Gea endured a wobbly moment soon after when his clearance went straight to the opposition. The Reds moved it out wide to Clyne, whose cross was cleared off the line by Chris Smalling.

The Spaniard redeemed himself with a fine save from Danny Ings. The former Burnley man then nudged the resultant corner towards goal, but Blind cleared off the line.

Just as Liverpool looked to be coming back into the game, they gifted United a second when Joe Gomez fouled Herrera in the box.

With regular penalty-taker Mata having been taken off for Martial, Herrera stepped up and he did not disappoint, banging a rising shot into the roof of the net to make it 2-0.

De Gea denied Jordon Ibe six minutes from time, but he could do nothing about Benteke's stunning overhead kick soon after. 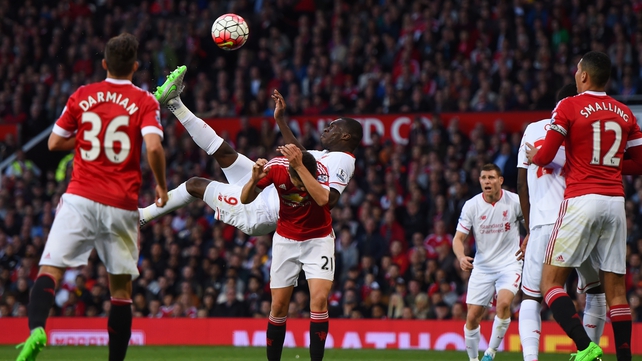 Martial extinguished any hopes of a comeback, though, when he cut in from the left and beat Mignolet after a mazy run into the box.