Sligo Rovers manager Micky Adams is hoping to remain positive after witnessing his side succumb to a four goal loss to Dundalk at Oriel Park in the quarter-final of the FAI Cup.

While hoping for better things to come, Adams admitted his side were not up to scratch against the league champions.

Speaking to RTÉ Sport, he said: "We were poor first half – I don’t sugar coat things, I think I’m honest and tonight wasn’t a good night for us.

"I think we were second best all around the pitch and we deserve nothing.

"It's disappointing because the point last week [in a 2-2 draw with Dundalk at Oriel] gave us heart that we could come down here and cause a shock."

Despite the defeat, Adams said he did not want to castigate his players too much in the middle of a relegation dog fight.

Sligo are in 11th place, two points ahead of Limerick, with Derry City, Drogheda United, Galway United and Longford Town all within touching distance.

"We’ve got six cup finals left and what we need to do is remain positive.

"The good thing is we don’t have to come to Dundalk anymore.

"I think four of the bottom six have got to come here so let's hope they can do us a favour."

Ex-Leicester City boss Adams, who took the reins at The Showgrounds last month, also said he is enjoying the challenge.

"I enjoy the working environment that I’ve got and the boys, other than tonight, have been first class." 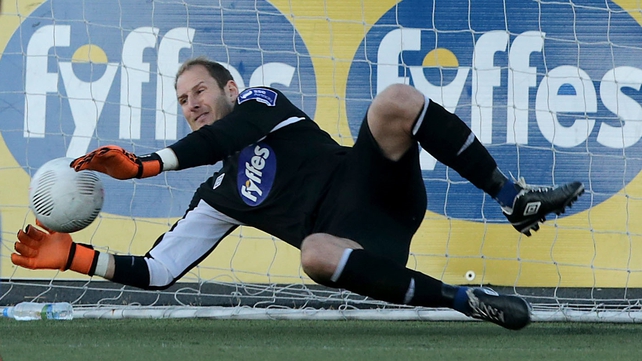 Dundalk goalkeeper Gary Rogers, who enjoyed a quiet, albeit very wet, night, was much more upbeat following the result.

Speaking to RTÉ Sport after the match, he saw the silver lining on the many rain clouds: "The rain probably helped us because the pitch is a bit quicker when it's wet like that."

"I thought we moved the ball really well."

Despite enjoying the lion's share of possession, Dundalk struggled to make the breakthrough in the first half.

"We created plenty of attacks in the first half without really testing Richard Brush in the Sligo goal, but in the second half we got the goals that our efforts really deserved.

"It was a good team performance and I wasn’t too busy – just the one save in the second half – I’d take that every week!"

Dundalk find themselves eight points clear of Cork City at the top of the table with six games remaining as they bid to win back-to-back titles and Rogers is hopefully their goalscoring for can continue.

"The lads are hungry for goals, everyone wants to get on the scoresheet and we really kept it going.

"The best form of defence is attack and you can see by the second half we were pretty good at that today."

Rogers, who has enjoyed a 15 year career in the League of Ireland, said this Dundalk side is probably the best he has played in.

"They certainly bring some different - with the quality in the side when they do win the ball back, you can see goals coming from everyone in the team.

"It's always hard to say is it the best team, but there wouldn’t be many better than it."