Stoke boss Mark Hughes is confident Jonathan Walters' professionalism will shine through now the transfer window has closed with him still at the Britannia Stadium.

The Republic of Ireland international was the subject of two bids from Barclays Premier League rivals Norwich, both of which were rejected, and the Potters managed to hold on to the forward despite reports he had handed in a transfer request.

Walters was left out of the squad against West Brom at the end of last month as speculation over a move intensified, yet Hughes is ready to call upon him again for the trip to Arsenal this weekend and can see no issue with the 31-year-old's mental state now he has to remain with Stoke.

"His immediate future and his future at the weekend is that he will be involved with our game against Arsenal," the Welshman said.

"Jon's not the only player that's gone through a similar situation during the transfer window. Once the window closes you have to refocus and get on with the job in hand.

"Jon's a very, very good professional. He'll get his head down. He's had a couple of weeks away with the international squad, did really well and scored a goal so it shows his focus was total for his international team. It will be similar for Stoke City; I'm absolutely certain of that.

"The transfer window is not easy for players, for managers, for football clubs. It is a distraction. Once the distraction is out of the way then you focus on what's important which is playing football."

Hughes is keen to keep Walters but the length of contract offered to the forward is believed to be a bone of contention.

His current deal expires at the end of the current campaign and while he could conceivably walk away then, Hughes is hopeful he is not in the midst of his final season for the club.

"I've said that until I'm blue in the face - yes, we want Jon to stay," Hughes added.

"There's a club view in terms of the length of the contract but, from a football point of view, what's important to me is that we keep Jon here if we can.

Many of the Potters' squad returned to training on Thursday following the international break but neither Mame Diouf or Marko Arnautovic were involved.

Both are doubtful for the Gunners clash with respective hamstring and ankle injuries, while full-back Glen Johnson is also nursing a slight groin problem.

Hughes is already without suspended duo Charlie Adam and Ibrahim Afellay after they were dismissed in the home loss to West Brom. 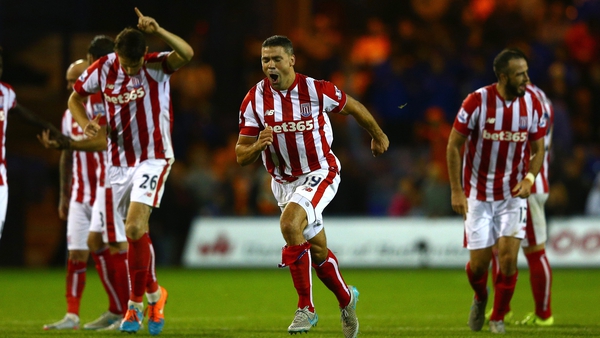