Wales must wait to join the party at Euro 2016 next summer.

Chris Coleman's side knew three points against Israel in Cardiff would see them qualify for a major tournament for the first time since the 1958 World Cup.

But despite dominating throughout they were held to a 0-0 draw by stubborn opponents who remain in the hunt for qualification in Group B but showed no attacking intent at all.

Wales could still qualify for the European Championships if Belgium fail to win in Cyprus later this evening, but they might now have to wait until October's closing double-header when they travel to Bosnia-Herzegovina and entertain group whipping boys Andorra.

The Dragons were 1/1000 on with some bookmakers to qualify for the finals after winning 1-0 in Cyprus on Thursday night, but there was still an air of tension among the supporters after so many near misses in the past.

There was a rich irony as Wales had beaten Israel in a play-off to qualify 57 years ago, but Coleman had insisted his players would not be affected by the hype and play the game, rather than the occasion.

Wales were true to Coleman's promise as they piled on the pressure from the first minute, Aaron Ramsey's second-minute heading goalwards but for the intervention of Oriel Dgani and then Hal Robson-Kanu flashing wide.

Andy King was then scampering right through by Robson-Kanu's clever pass after eight minutes but goalkeeper Ofir Marciano stood tall and Ramsey headed the rebound over.

Israel made two changes at the break with the introduction of Tal Ben Haim Junior and Tomer Hemed suggesting a more adventurous approach from the visitors but Wales were still the dominant force.

Jazz Richards, just as he had done in Cyprus for Bale's winner, swung over a cross which Robson-Kanu failed to keep down and Bale then fired over after having some green grass to run into for the first time.

Bale's free-kick was too high to trouble Marciano and Wales were screaming for a penalty when the ball struck Eytan Tibi on the arm as Robson-Kanu waited to pounce, but the Croatian referee was uninterested.

Israel had hardly been an attacking force of any description but seven minutes from time Ben Haim junior broke down the right and crossed, the unmarked Hemed stooping for a header which Wayne Hennessey tipped over.

An exhausted Bale went close twice late on and Church had the ball in the net in the dying seconds when he headed home.

But Church was rightfully deemed offside - and Welsh celebrations were put on hold. 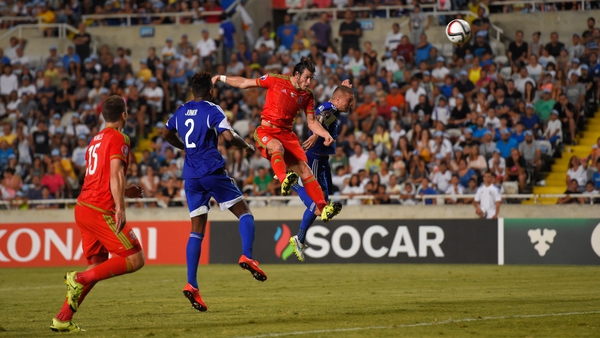