United spared Brugge no mercy as Louis van Gaal enjoyed the joint-biggest win of his time as United boss.
Rooney was the star of United's victory. The United captain will come up against more formidable defences than Brugge's this year, but the way the way he took all three of goals in this 4-0 win was impressive.

The 29-year-old latched on to Memphis Depay's through-ball to put United ahead in the 20th minute and he converted passes from Ander Herrera and Juan Mata to record his first hat-trick since September 2011.

Herrera completed the rout in the 63rd minute after Brugge's defence went to pieces and it would have been five had Javier Hernandez not missed a late spot-kick. 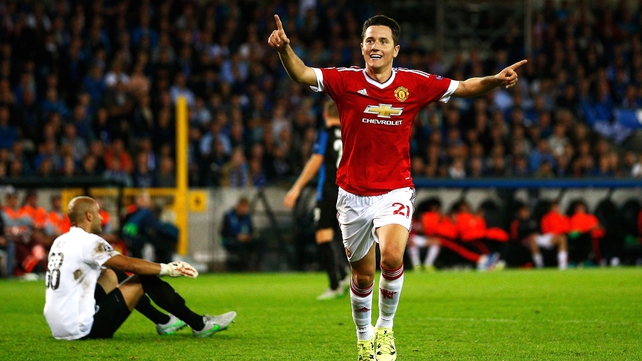 After a painful one-year hiatus, United will dine at Europe's top table this season and their fans will be confident of more Champions League glory nights after this impressive win.

With the fear of dropping into the Europa League running through their veins, United started nervously.
Herrera, making his first start of the season, looked the most tense player on the pitch.

The Spaniard gave the ball away frequently and entered the book for a foul on Victor Vazquez.

Boli Bolingoli-Mbombo burst through a static defence, but backheeled to no one despite having a chance to shoot on goal.

Brugge paid for their profligacy when Rooney broke the deadlock in the 20th minute.

Just as they did in the first leg, the Brugge defence allowed Depay to cut in from the right flank. He strode past three players and slipped the ball through to Rooney, who nudged the ball past Brugge goalkeeper Sinan Bolat.

Brugge cranked up the pressure before the break. Sergio Romero saved awkwardly from De Sutter and flapped at another shot before redeeming himself on the stroke of half-time by diving at Abdoulay Diaby's feet to pinch the ball off the dallying striker.

After the break it was plain sailing for United. Van Gaal brought off Adnan Januzaj and pushed Herrera into the number 10 position.

Within four minutes of the restart, the former Athletic Bilbao man had supplied Rooney with his second.
Herrera drifted out to the right flank to pick up Depay's pass before squaring to Rooney who tapped in the easiest of finishes.

The skipper rounded off his hat-trick in the 57th minute. This time it was Mata who supplied a low pass from the right which Rooney converted.

Rooney could have scored his fourth moments later when he broke through the Brugge defence, but chipped the ball wide.

Herrera did not pass on the chance to add to the scoresheet just before the hour, though. The midfielder raced on to Bastian Schweinsteiger's through-ball and stroked the ball past Bolat to seal United's place in Thursday's group stage draw.

United could have added a fifth when Rooney's cross struck Duarte's hand and the referee pointed to the spot. The skipper selflessly handed the ball to Hernandez, but he slipped and put the spot-kick wide.

Rooney said while his second goal killed the tie off, his first was the most important in terms of Man Utd's progression to the group stages.

Despite his well-publicised goal drought, Rooney told RTÉ Sport he was not under pressure as he wasn't missing chances.

Rooney says he was not under pressure despite goal drought

Rooney said "I'm a finisher and if I get chances I’ll score goals, that’s happened tonight.

"If I was missing lots of chances its a different thing, but the chances I have had I've taken."

Rooney also said he let Hernandez take the penalty as he felt it was important for the Mexican to get on the scoresheet.

The England international also reiterated the fact his preferred position is as a striker.

"To play there you have to take on the mantle of scoring goals and I am confident that will happen. The early part of the season, everyone else was trying to create pressure but I've stayed calm, stayed working in training and thankfully that’s paid off."

Rooney also said the team have to believe they can win the competition, saying there is no point in qualifying without that belief.

"We know it will be tough, but we have to take each game as it comes and hopefully we can have a good run in it and you never know."

United now find themselves in pot two for Thursday's draw for the group stages, which will be shown live on RTÉ Player and RTÉ News Now.