Robbie Keane sent a timely reminder of his goal-scoring prowess as his weekend brace helped LA Galaxy to a 5-1 victory over New York City in the MLS.

Ireland’s record goal-scorer was on the mark twice and created another in a performance that was a major statement of intent from both LA Galaxy and Keane.

Keane may not have the lightning quick pace to unlock the world’s best defences these days but he’s proven time and again that he can score for his country and you can expect him to add to his tally against Gibraltar and Georgia next month.

Kevin Doyle and Sean St Ledger were both involved in Colorado Rapids' 1-0 victory over Chicago fire but it was St Ledger who was by far the busier as he helped lead a rear-guard action that saw his side defend a 1-0 lead for 89 minutes.

After taking the lead in the first minute, St Ledger and the rest of the Colorado back four were under near constant pressure. The Irish defender was hugely impressive and afterwards said: “It’s probably the best feeling when you score in the first minute and defend the majority of the game.

“It wasn’t pretty football but we dug in and got the result. It’s nice to keep the clean sheet in my second game.”

Aberdeen’s Adam Rooney was another member of the recently named Ireland squad who was on the mark at the weekend.

Rooney forced his way into Martin O’Neill’s thoughts last season as he claim the SPL’s golden boot and he’s already made in-roads into reclaiming that title. 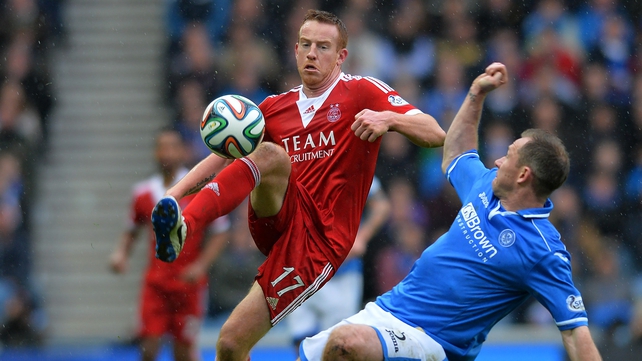 A header and a penalty from Rooney was enough for his Aberdeen side to claim a 2-0 victory over Dundee and the striker will believe he has done enough to be included in the final squad for that qualification double-header. Given a chance, you’d have to fancy him to open his international account.

One player who won’t be involved in September’s games is Cillian Sheridan but the Cavan striker has started the season well in Cyprus, scoring twice in Omonia Nicosia’s 5-3 victory over Nea Salamis at the weekend.

Stephen Gleeson also missed out on a place in O’Neill’s latest squad but he made up for that omission with his first goal for English Championship outfit Birmingham via a slight deflection to his long range effort as they claimed a 1-1 draw with Derby.

Richard Keogh impressed for Derby County in the heart of the Rams’ defence, continuing what has been a fine start to the season for the Derby skipper.

John O’Shea also impressed in defence, helping to steady the floundering Sunderland ship after a terrible start to the Premier League which saw them give up seven goals in two defeats.

Captain O’Shea came in for his first start of the season against Swansea and made an immediate impact, helping to restore some much needed solidity to his side’s defence and utterly dominating in the air as the Black Cats claimed their first point of the season with a 1-1 draw.

West Brom’s James McClean was quietly impressive against Chelsea and played a part in the move that earned his side a penalty which, had it been converted, would have earned the Baggies a 3-3 draw. He was perhaps harshly sacrificed for an extra striker with an hour to go as Brom chased an equaliser.

Robbie Brady and Wes Hoolahan can both expect to feature against Georgia and Gibraltar and in those games will most likely have easier days than they did in Norwich’s game with the ever improving Stoke at the weekend.

Nevertheless, both Irish players turned in a solid shift in their side’s 1-1 draw, with Brady being the more impressive and just about coming out on top in his personal battle with former Bayern Munich star Xherdan Shaqiri.

Hoolahan meanwhile was a constant thorn in side of the Stoke defence, often appearing as the extra-man with some surging runs from midfield. He will however be disappointed not to have found the net with a free header in second half.

Glenn Whelan featured for Stoke in midfield but put in a somewhat subdued display as much of the game bypassed him in midfield.

Everton’s Seamus Coleman and James McCarthy endured a torrid afternoon as the Toffees were well beaten by Manchester City. Neither player covered themselves in glory on an afternoon in which their side were second best throughout.

Darren Randolph’s Bournemouth nightmare continued as the West Ham goalkeeper shipped four goals to the Premier League newcomers at the weekend as his side were beaten 4-3.

Randolph conceded 12 goals to Bournemouth in the Championship last season and while none of the four that the Bournemouth scored at the weekend could said to be his fault, he’ll nevertheless be getting cold shivers anytime he hears the word cherry.

Eunan O’Kane celebrated his call-up to the Ireland squad with a solid display in midfield for Bournemouth. Deployed in a more defensive, covering role, he was unable to make much of an impression from an attacking point of view, but did help to shield his back line when called upon to do so.

A great way to end the week. Deserved our win today. Thank you for all your messages this week, they don't go unnoticed! #afcb 🍒🍒🍒🍒

Shane Long was a second-half substitute for Southampton in their scoreless draw with Watford and although he was full of endeavour and effort, he never looked like helping to break the deadlock.

Ireland manager O’Neill recently question Long’s mindset, comparing him unfavourably to Robbie Keane and this latest performance will have done little to change the manager’s mind.

O’Neill said: “I think Shane has to get into a mentality to think about scoring goals - he has to be able to do that. He is getting opportunities, comes on as sub for Southampton and scores the goal against Newcastle last week. Then he starts the game and maybe doesn't finish the match.

"Whatever you say about him, Robbie Keane comes out and plays like a No 10 role quite often. He's done it at Tottenham and different clubs but can still find time to get into the penalty box to score a goal because that's what he feels is his major contribution. Shane has got to get into that mentality."

There was plenty of Irish involvement in Reading’s scoreless draw with MK Dons as Paul McShane, Stephen Quinn and Simon Cox all featured for the home side while Darren Potter and Samir Caruthers both started for the Dons.

It was Potter and Caruthers who would have been happier with the result as their side was often outplayed by Reading. McShane was solid and dependable at the back, although he did have a few nervy moments in the air, while Quinn linked up well with his midfield partners and tested the visitors’ goalkeeper with a couple of long range efforts.

Cox was introduced late on and didn’t really have enough time to make much of an impact. 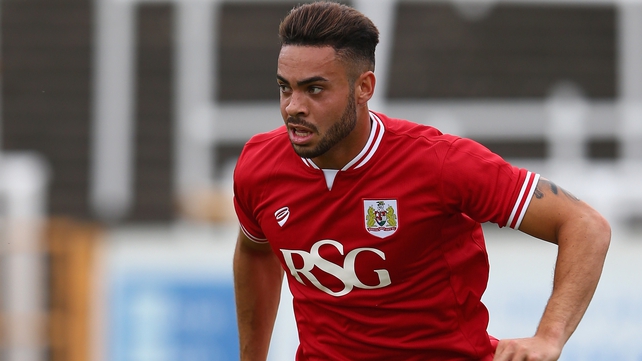 Derrick Williams turned in his best display of the season so far as his Bristol City claimed their first win of the campaign with a 1-0 win at Middlesbrough. Williams dominated defensively from his fullback position and while he didn’t have much of a licence to break forward, he was always on hand to snuff out any danger before it developed.

Mick McCarthy’s Ipswich maintained their unbeaten start to the season with a 2-1 win away at Preston North End, a result which keeps them top of the Championship.

Of the sizeable Irish contingent at Ipswich only Jonathan Douglas and David McGoldrick featured, with neither standing out particularly. McGoldrick was hauled off half-an-hour from time after one wayward effort from range too many.

In League One, Walsall’s Anthony Forde opened the scoring in his side’s 2-1 victory over Coventry, a result which moved Walsall up to second in the table.

Forde finished neatly from inside the penalty area and his all around performance earned the praise of his manager Dean Smith who said: “Anthony has been doing really well in training and when he's come on in games.”

Barnsley drew 0-0 with Bradford at the Oakwell Stadium, despite the best efforts of Conor Hourihane, whose creativity was a bright spot for the home side.  The Cork native’s delivery, particularly from dead balls was a real boon for Barnsley, but they had no-one who was able to convert.

Ireland Under-21 Conor Wilkinson was given a 15-minute cameo role for the Tykes but his biggest achievement of the afternoon was to get booked almost as soon as he was introduced.

Paddy Madden was left wondering how he failed to get his name of the scoresheet in Scunthorpe’s scoreless draw with Millwall.

The former Bohemians player missed a penalty, hit the crossbar, was denied in two one-on-ones with the goalkeeper and saw a goal ruled out for offside as Millwall somehow claimed their first clean sheet of the season.

There was disappointment for Millwall goalkeeper David Forde who was dropped having conceded eight goals in the first three league games of the season. However manager Neil Harris did praise Forde for the way in which he dealt with the news and supported his 19-year-old replacement Jordan Archer.

“I have to give a special mention to David Forde who helped prepare Jordan for the game, mentally and physically, and that showed his character and personality and who he is,” Harris said afterwards.

James Collins rescued a point with a well-taken finish that gave Shrewsbury a 1-1 draw away to Oldham. Collins was lively throughout, linking up well with on-loan partner Liam McAlinden, and made the telling contribution with 20-minutes to go by rounding the goalkeeper and slotting home into an empty net.

Former Sligo Rovers manager Paul Cook saw Enda Stevens sent off after picking up two yellow cards as Portsmouth came back from 3-0 down to draw 3-3 with Morecombe in League Two.

Goalkeeper Barry Roche and Jamie Devitt both featured for Morecambe with Devitt getting the assist for his side’s third goal.

Gary Burke scored Notts County’s only goal as they were held to a 1-1 draw with Accrington Stanley but will feel he should have had more. Burke had several chances to score and hit the crossbar before he eventually broke the deadlock with a header on 76 minutes.

Further afield and Billy Mehmet was again among the goals as Malaysian side Sarawak ended their disappointing league campaign with a 4-3 defeat. Mehmet played a part in his side’s opening goal as it was his rebounded shot which was eventually turned home before he found the net himself minutes later. 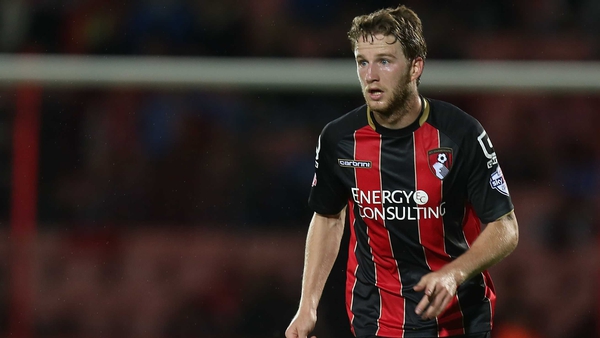