Sligo Rovers took full advantage of playing against 10 men for 65 minutes as they boosted their survival hopes and plunged Drogheda deep into relegation trouble in this SSE Airtricity League Premier Division clash at United Park.

Lee Duffy, Robert Bayly and Sean Thornton all had early shots for Drogheda, but on 25 minutes Bayly was shown a straight red card for a late tackle and Sligo quickly found themselves 2-0 up through Morten Nielsen and Jason Hughes.

Anthony Elding made a late substitute appearance for the visitors and netted from the penalty spot on 84 minutes after a foul on fellow sub Keith Ward.

With Drogheda six points ahead of the Bit O’Red and bottom club Limerick gaining ground fast, this was a chance for the home side to take a huge step towards Premier Division safety and they made the more promising start.

Bayly and Lee Duffy tested Sligo keeper Richard Brush after some enterprising approach play and Sean Thornton dragged another shot wide after being teed up by Duffy.

Rovers eventually fashioned their first opportunity mid-way through the first half when Alan Keane swung in a cross towards Sander Puri, whose header was easily held by Drogs keeper Micheal Schlingermann.

Sligo could hardly have anticipated what would happen over the next nine minutes as they found themselves two goals ahead against a Drogheda team who were reduced to ten men.

The sending-off after 25 minutes was hugely controversial as Bayly brought down John Russell in the centre circle. The challenge seemed without malice and looked like a yellow card would have sufficed.

From Sligo’s next attack Schlingermann produced a brilliant save to his right to keep out a Morten Nielsen header but the Danish striker was celebrating from the resulting corner when he headed home from Russell’s centre.

Drogheda winger Adam Whelan limped off just before the half-hour mark after suffering a knock earlier in the game and worse was to follow for the Boynesiders on 31 minutes.

Thornton and Alan Byrne left the ball to each other in the centre circle and Jason Hughes nicked possession before running unchallenged towards goal and slipping a low shot beyond Schlingermann to put Sligo firmly in the driving seat.

Neither side created any opportunities for the remainder of the first half, but the second was only six minutes old when the visitors copper-fastened the three points.

Russell’s cross was met by Nielsen, who netted at the second attempt after his initial header was parried by Schlingermann.

Nielsen was denied his hat-trick by the keeper who saved low to his right in the 55th minute, and Gavin Peers headed over the bar from the resulting corner.

Just before the hour mark the ten-man Boynesiders did put together a fine passing move, with Thornton and Ger Pender involved before Michael Daly’s cross was met by a firm header from substitute Stephen Maher. However, Richard Brush in the Sligo goal made a comfortable save.

The visitors emptied their bench in the last 20 minutes, bringing on both Anthony Elding and Dinny Corcoran, and it proved to be a memorable return to Sligo colours for Elding, who netted from the spot in the 84th minute after Daly had fouled Keith Ward in the box. 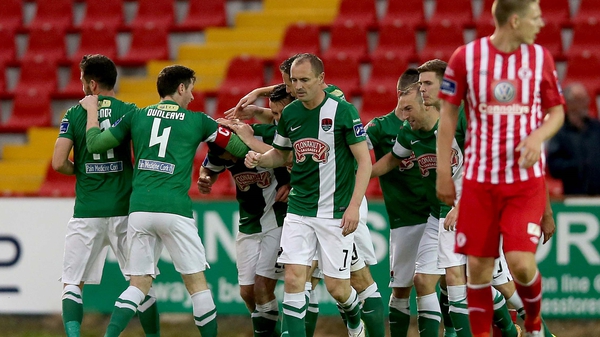