Leicester have handed striker Jamie Vardy a "substantial fine" and said he will take diversity awareness training after the England international was filmed using racist language in a casino.

The Sun on Sunday published a video showing Vardy abusing a fellow gambler and calling him "Jap" on three occasions. The incident is reported to have taken place in the early hours of July 26 and the 28-year-old has since apologised for a "regrettable error in judgement".

The Premier League club have been conducting their own investigation into what happened and in a statement on Thursday evening announced they had dealt with the matter.

The statement said: "Leicester City Football Club has concluded its investigation into claims made against Jamie Vardy in the national media last weekend.

"Having established a full account of the incident in question and taken into consideration Jamie's prompt apology, the club has issued the player with a substantial fine and prescribed a programme of diversity awareness training.

"Jamie has been reminded of his responsibilities to the club, his profession and the Leicester community. The fine will be donated to local charities. The club will make no further comment on the matter, which it now deems to be closed."

Earlier in the day, Leicester manager Claudio Ranieri insisted Vardy would not be sacked as he fielded questions on the incident at his pre-match press conference, ahead of the trip to West Ham on Saturday.

Leicester are owned by the Thai Srivaddhanaprabha family and it is only a matter of weeks since they terminated the contracts of Tom Hopper, Adam Smith and James Pearson, son of former manager Nigel, for their conduct on a close-season tour of Thailand.

Ranieri was confident the same fate would not befall Vardy, which the later announcement confirmed.
Italian boss Ranieri said: "No. It is not my matter, but he won't be (sacked). The situation is everything is okay, Jamie apologised to everyone, it was a mistake.

"The relationship is okay. We go on and forward. The club has said it is okay. James has apologised and for me it is okay."

Leicester will be hoping it is business as usual at Upton Park, where it looks like Vardy will retain his place in the Foxes team.

"I think so he will start. Every match is different and the manager must choose the best solution for his players," said Ranieri.

Vardy, who opened the scoring for Leicester last weekend as they began the season with a 4-2 home victory over Sunderland, was a late bloomer at the highest level.

He was still playing non-league football with Fleetwood as recently as 2012 but made his name following a £1m move to Leicester.

That made him the most expensive non-league player in history but he soon began repaying the faith of then-manager Pearson.

He scored 16 goals as the Foxes won promotion to the top flight, netting five times during the last campaign as the team fashioned an unlikely escape from relegation.

Vardy was rewarded with a maiden England call-up by Roy Hodgson, making his debut as a second-half substitute in the goalless friendly draw against the Republic of Ireland in June. 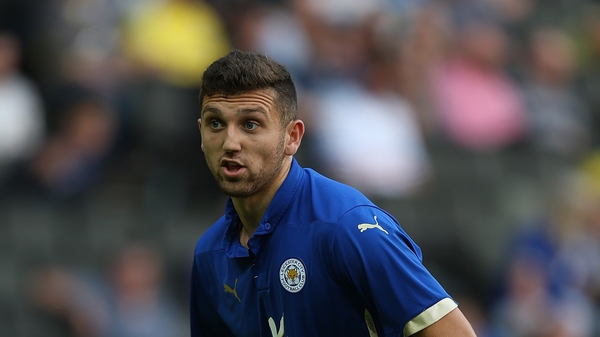