With the score delicately poised at 1-1, Schlingerman first sprung to telling action on 71 minutes when getting down to his right to make a terrific one-handed save from Kevin O’Connor's low shot.

Longford, with five changes from their biggest defeat of the season at home to Cork last week, were forced into another one within three minutes of the start when striker Dean Kelly limped off.

Club skipper Mark Salmon came on and might have done better than blaze over the bar from the game’s opening chance on seven minutes.

Two minutes later Kaleem Simon made no such mistake to put Longford in front.

Getting a toe to O’Connor’s cross from the right, the ball sat up nicely for the Longford winger who followed up to shoot past Schlingermann for his second goal of the season.

Town were livid on 21 minutes when not given a penalty after Alan Byrne clearly pulled down Gary Shaw. That coming just a minute after Byrne had been booked for hauling down Shaw just outside the box.

Referee Jim McKell’s refereeing was contributing to a tetchy encounter which should have seen Drogheda equalise on 32 minutes.

Schlingermann’s clearance somehow ran through to put Tiarnan Mulvenna in on goal. The striker rushed his effort, however, shaving the crossbar with a blasted volley when a little subtlety was required.

If that was wasteful, Sean Thornton then missed a penalty for Drogheda four minutes into the second half.

Tripped by O’Connor inside the area, midfielder Thornton stepped up and placed his spot kick yards over the top for a dreadful miss.

Longford might have doubled their lead four minutes later. An incisive run in from the right by Ayman Ben Mohamed opened Drogheda’s defence to set up Salmon who should have done better than shoot tamely at Schlingermann.

But John McDonnell’s side were level on 68 minutes. Substitute Ger Pender threaded a ball through for Duffy to fire between the legs of home keeper Paul Hunt. 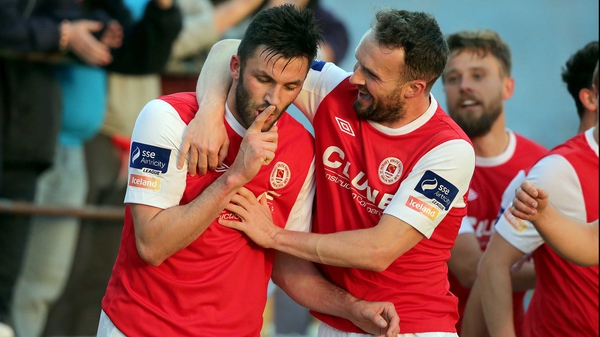