Dundalk host BATE Borisov at Oriel Park on tonight (live on RTÉ2 and RTÉ Player from 7.30pm), hoping to overcome a 2-1 first leg deficit in their Champions League qualifier.

The reigning SSE Airtricity League Premier Division champions are very much in the tie after David McMillan’s strike in the first leg in Belarus gave them a crucial away goal.

Stephen Kenny's men impressed in the game and bossed possession for long periods, forcing several fine saves from the BATE goalkeeper, and his opposite number Gary Rogers is confident his side can turn things around at Oriel Park.

“We were disappointed with the defeat. The second goal was disappointing with the way it took a deflection. But I thought we played really well and gave a good account of ourselves," Rogers said.

"It was a hollow victory in a way. We want to play really well and win the tie. If we play to the best of our capabilities we are more than capable of doing it."

“All eyes are focused on this game. There’s great intensity in training, there always is. The lads are eager to line out in the game and play their part. There is completion all over the place to get in the starting XI.

"Nobody is guaranteed a position and that’s the way to have it. Everyone is wishing us well and hopefully we can make the breakthrough for them."

Dundalk have no injury worries and will have a full squad to choose from with Ronan Finn and Andy Boyle fully recovered from their ankle and calf problems respectively.

The tie will be screened live on RTÉ2 television and played to a finish on the night also with extra-time and penalties required if the match finishes level at 3-3 on aggregate.

Meanwhile, Crusaders bowed out of the Champions League at the second qualifying round stage despite a thrilling 3-2 win over Skenderbeu of Albania.

The tie was as good as over after a 4-1 first-leg loss, but they were given a window in this one when Renato Arapi was given an 11th-minute red card.

Crusaders then went on to open the scoring, Stephen Flynn on target 50 minutes in.

But the 10 men responded and levelled on the night through Bernard Berisha (69) and went ahead through Liridon Latifi (77).

It would be Crusaders' night, though, with Matthew Snoddy scoring two minutes into time added on and Andrew Mitchell winning it 60 seconds later. 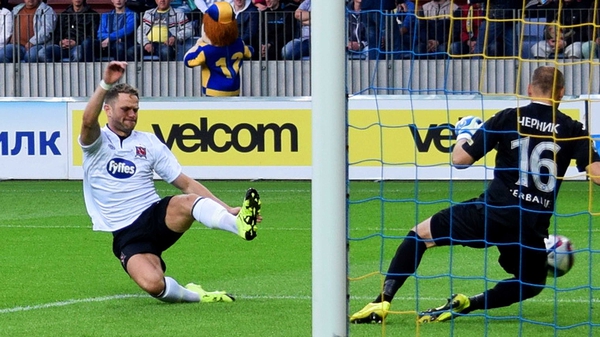 Stephen Kenny: We can scalp BATE Borisov in second leg