Shamrock Rovers boss Pat Fenlon said his side’s progress to the second round of qualifying for the Europa League will give a “massive” boost to all aspects of the club.

Kieran Marty Waters bagged a brace, and defender Dave Webster got his first goal for Rovers in a comprehensive 3-0 second-leg win over Progrès Niederkorn that meant the Hoops won 3-0 on aggregate and will now play in next week’s second round.

Speaking to RTÉ Sport after the game, Fenlon said the increased prize money Rovers now receive – an extra €210,000 – would be a major benefit for the club.

“It’s massive for the club," he said. "I know me as the manager and the coach and the players can’t really think about it, but it has an impact on everything in the club ... not just about signing players, but everything: improving facilities, improving stuff for the younger players in the club.

“All that sort of stuff is important for the club.”

Fenlon praised Rovers’ opposition, who in the end were conclusively beaten. He said that although Rovers had had the measure of Progrès Niederkorn in regular play, the team from Luxembourg had posed problems at set-pieces.

“I think everybody has seen they’re not a bad side. In fairness to them they did create a few chances, mainly off set pieces,” he said.

“We knew it was going to be difficult because they were decent away from home as well.”

He hailed his play, particularly in the build-up to Waters’ second goal, his side’s third, when Rovers strung passes together with style.

“It was a great move, and Marty finished it off well, but there was some good movement,” he said.

“That sort of killed the game for us, as well; it takes a little bit of pressure off, because at 2-0 you’re always thinking, ‘Well, one goal and you’re back in the game.’ So it was important to get that third goal.” 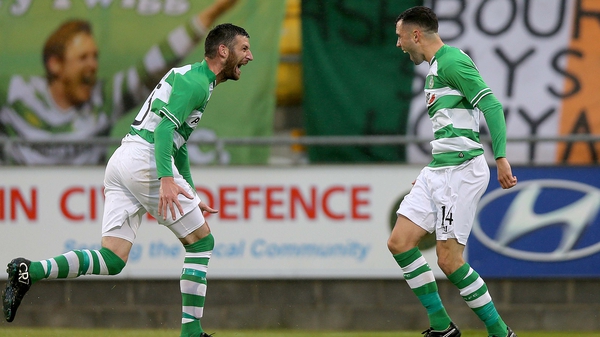