Galatasaray have announced the signing of Lukas Podolski from Arsenal, with the Germany international signing an initial three-year deal.

Podolski, 30, was expected to leave the Emirates Stadium this summer having slipped down the pecking order following the arrivals of players such as Mesut Ozil and Alexis Sanchez.

He spent the second half of last season on loan at Inter Milan and has now signed a contract with the Super Lig champions, with an option for a fourth year in place.

Announcing the deal through their website, Galatasaray confirmed an initial fee of €2.5million plus add-ons for how well the club perform during the length of Podolski's stay, with the former Bayern Munich man tweeting a picture of himself inside the Turk Telecom Arena.

President Dursun Aydin Ozbek admitted Galatasaray had been chasing the signature of the World Cup winner for some time and was pleased to have finally worked out a deal for the forward.

"Podolski was a player we have been following for a long time," he said at the announcement of the signing.

"We have met the expectations of our fans. We think he will serve us for many years."

Podolski, who started for the Gunners in the 2014 FA Cup final victory over Hull, had long been linked with a move to Galatasaray and his agent Nassim Touihri said on Friday that Arsenal boss Arsene Wenger had begrudgingly allowed the player to leave.

"We had good talks with Wenger," Touihri said.

"He wanted to keep Lukas at Arsenal but could not guarantee him a starting position. That's why we agreed to make a transfer."

Despite moving to Arsenal with a fine reputation, Podolski's chances became limited as Wenger added the likes of Ozil, Sanchez and Danny Welbeck to his forward options.

He also has Theo Walcott, Olivier Giroud and Alex Oxlade-Chamberlain at his disposal, which is the likely reason why the Frenchman could not guarantee Podolski the game-time he craves. 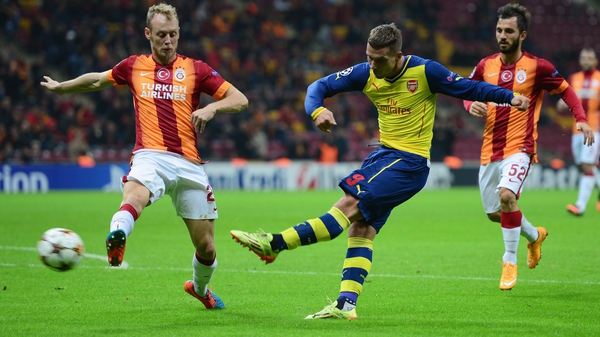