Mexico made an underwhelming start to their Copa America campaign as they were held to a goalless draw by Bolivia in Vina del Mar last night.

Miguel Herrera's side dominated possession but created few clear-cut chances at the Estadio Sausalito as Bolivia were rewarded for a resolute defensive display with a point.

Mexico striker Vicente Vuoso had the best chance of the match midway through the second half but he glanced his point-blank header wide of the target, while team-mate Javier Aquino felt hard done by when his pleas for a late penalty fell on deaf ears.

Herrera left out several of his regular players for this tournament ahead of next month's CONCACAF Gold Cup, but that did not stop his side from dominating proceedings throughout.

Juan Carlos Medina volleyed narrowly wide in the 12th minute after trickery from Vuoso set up the shooting chance, while goalkeeper Romel Quinonez had to be alert to save Gerardo Flores' effort from an acute angle after he had given Bolivia's back-four the slip.

Bolivia took a while to settle into the match but could have taken the lead late in the first half when Jhasmani Campos turned exquisitely and unleashed a fierce shot from 25 yards, but Mexico keeper Jesus Corona was alert and deflected the ball behind for a corner.

The second half was just three minutes old when Mexico broke quickly but, after finding himself through on goal, Jesus Manuel Corona could only skew his shot wide of the target.

Mexico were approaching something like their fluent best as the second half wore on but Vuoso fluffed his big chance to notch the game-winning goal in the 69th minute when he headed Jesus Corona's cross across the face of goal when he seemed destined to score.

Mexico continued to press for a winner and substitute Aquino thought he had earned his side a penalty with 10 minutes left when he went down under Alejandro Morales' challenge, but referee Enrique Caceres waved away his appeals for a spot kick and Bolivia saw out the remaining minutes to ensure a share of the spoils. 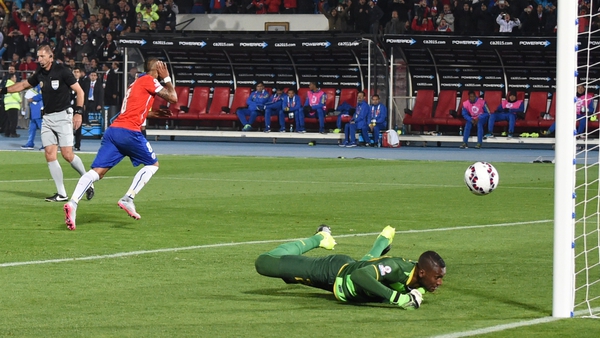