The FAI has confirmed that match-day programmes for the Republic of Ireland’s Euro 2016 qualifier against Scotland, in which chief executive John Delaney criticised FIFA, were shredded and reprinted without the message.

The Irish Daily Mail reported that the FAI had spent €10,000 having the programmes republished, to remove a message from Delaney in which he said the culture in FIFA under president Sepp Blatter “was one of corruption and bribery”.

18,000 programmes were reportedly shredded and reprinted without the comments.

An FAI spokesman told RTÉ Sport that Delaney had not been aware of the decision to replace the programmes.

It was an “editorial decision” to scrap the programmes, the spokesman said.

The FAI contested the amount reported, claiming it had cost only €6,700 to reprint the programmes.

In his initial comments, Delaney said there had been “seismic change on the global football front” with Blatter’s announcement that he would resign from his position as FIFA president.

“That decision was a major step and allows the football world to address the need to change the culture of FIFA," Delaney wrote.

“It was all too obvious that the culture was one of corruption and bribery.

“Those who love the game have been crying out for change and now the opportunity is there.

“I have stated many times that the global body needs to adopt the attitude of accountability and transparency which has been cultivated in UEFA under the leadership of Michel Platini and I hope that FIFA can take similar steps in the right direction.”

Delaney has come in for criticism in recent days over the €5m loan the FAI received from FIFA in the wake of Thierry Henry’s handball during Ireland’s 2010 World Cup play-off defeat to France. 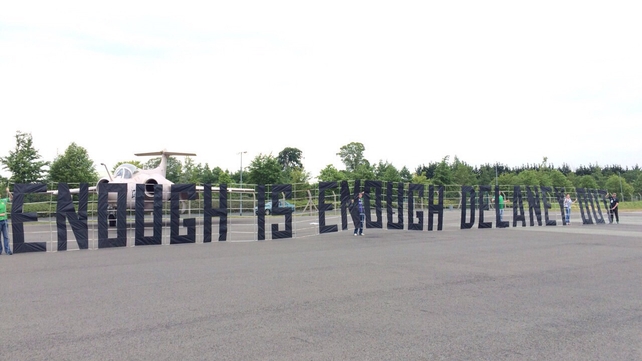 Meanwhile, a protest by a group of Republic of Ireland supporters, in which they planned to hire a plane to fly over the Aviva Stadium, before and during half-time of tonight's game with a message calling for Delaney to quit as chief executive, has been cancelled.

The group of season-ticket holders claimed that members and supporters from approximately 80% of League of Ireland clubs donated money to hire the plane.

However, shortly before kick-off the organisers said that the arrangement to fly the message had been been cancelled.