Derry completely dominated the first half but failed to make it count until the 40th minute when Mark Timlin fired a 30-yard free kick past Drogs keeper Micheál Schlingermann.

The home side improved marginally after the break, yet their equaliser came out of nothing when Whelan climbed highest to send a looping header in off the underside of the bar.

After that there was little sign of either side conjuring a winner until stoppage time when Drogheda’s Lee Duffy rounded Derry keeper Ger Doherty but had his shot blocked by Aaron Barry.

Derry came into the game on the back of a miserable run, but they owned the ball for the first half hour against a laboured Drogheda side who were missing playmaker Sean Thornton because of illness.

Early shots from Patrick McEleney and Ryan Curran were a sign of the Candystripes’ hunger from the outset, and Curran then headed over the bar from a McEleney cross before the latter send a tame effort trickling through to Schlingermann.

On the rare occasions the Boynesiders got into opposition territory, the assistant referee’s offside flag intervened several times, and 38 minutes were on the clock before Doherty was in any way tested: Sean Brennan got on the end of a long throw to head straight into the keeper’s hands.

But any confidence gleaned from that half-chance for the home side was quickly extinguished by a superb Derry goal.

Timlin was brought down in full flight by Stephen Maher 30 yards out but picked himself up and drove the resulting free kick past a stunned Schlingermann.

It was the least Derry deserved and well timed, coming just before the interval, and there was no evidence of any improvement in Drogheda’s play in the early stages of the second period.

But out of nothing they drew level in the 59th minute when Joe Gorman’s left-footed cross was met by Whelan, whose looping header struck the underside of the bar and bounced down over the line.

The game went into a lull after that for a 15-minute spell before Derry should have levelled as Dean Jarvis cut the ball back from the byline towards Curran who side-footed wide from 12 yards.

At that stage both sides would probably have settled for a point and the last few minutes were nervous and cagey.

Drogheda almost won it in stoppage time when Duffy dispossessed Barry 30 yards out and cut infield before seeing his shot blocked by a defender, but overall a draw was probably a fair outcome. 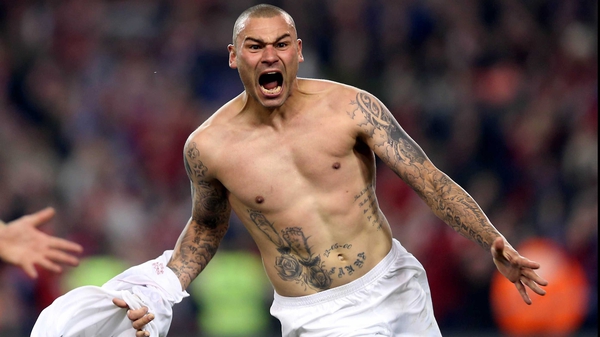