Scotland manager Gordon Strachan has essentially been told that he has a job for life with the SFA, while also being likened to First Minister Nicola Sturgeon for the work he has done lifting the nation. All seems very rosy in the Scottish garden indeed.

The Irish, meanwhile, are shuffling uneasily in their Abbotstown abode hoping that a certain €5m storm passes, but while the blue skies of summer have arrived this week in the build-up to this weekend’s important EURO 2016 qualifier, that particular black cloud will be looming large a while longer at least.

But there really is something about Scotland at the moment, from the nation’s continued resurgence, despite the defeat in the independence referendum, right through to the football team who have uncharacteristically been riding the crest of a wave competing with the best of Group D, which includes World Cup holders Germany.

Strachan, meanwhile, has no problem talking up his side’s chances, claiming that the Scots will be looking to leave Dublin with all three points.

The Scottish boss got the better of his Irish counterpart in the opening clash at Celtic Park, but will surely be happy to part with a point, which could put an end to Ireland’s chances of getting out of this group.

So here's a look at Scotland's probable XI to face Ireland in Saturday's vital European qualifier (5pm, live on RTÉ2) 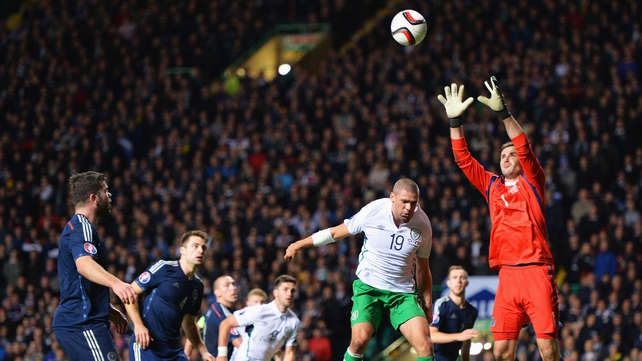 While under pressure from Celtic stopper Craig Gordon for his international jersey, manager Gordon Strachan should stick with the keeper who has served him well so far in this campaign.The Scottish keeper has cemented his place as his country's number one under Strachan and will be keen to impress with speculation that the Cardiff keeper will be back playing in the Premier League next season.

Marshall has proved to be one of the best shot-stoppers in the business but was rarely threatened in the first clash at Celtic Park. The supposed Liverpool target can expect a busier 90 minutes in Dublin. 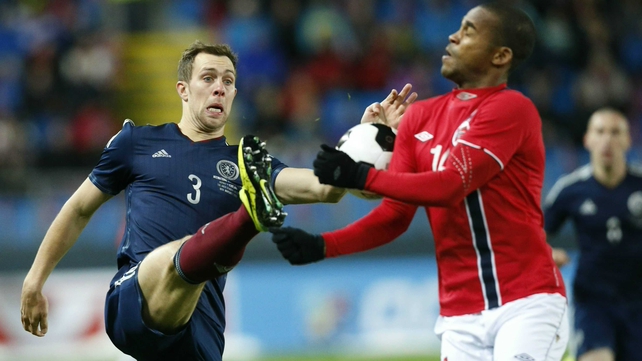 Another of the Scottish squad set to be plying his trade in the Premier League next season following Norwich’s promotion following their play-off victory.

Strachan will probably resist the temptation to move Whittaker back into the centre of the defence in Grant Hanley’s absence and he should remain at right back with Alan Hutton missing out.

Another who was not tested in the Celtic Park encounter and actually found himself move advanced than normal. O’Neill’s selection on the left flank will be crucial to test the defensive frailties of the former Rangers man and will be expecting to have Whittaker tracking back rather than bombing forward. 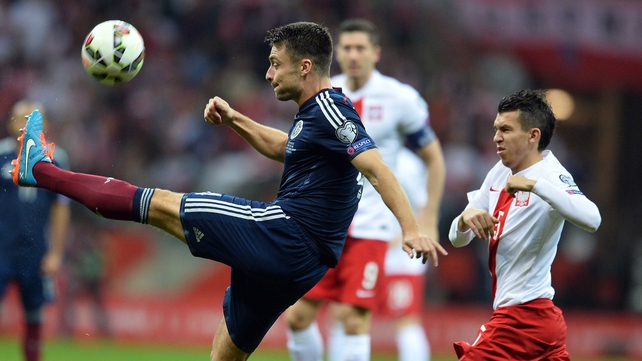 The Norwich City defender will be the key figure in the heart of the Scotland defence as regular central defensive partner Grant Hanley failed to get back to full fitness before the end of the season, missing out on the squad for the Dublin trip. Martin enjoyed a fine season at club level, guiding the Canaries back to the Premier League and should be paired up alongside Celtic’s Charlie Mulgrew in the centre of defence. Martin coped admirably with Ireland’s attacking style and direct approach in the Celtic Park encounter but may be faced with a more creative approach at the Aviva as O’Neill’s side need the victory. 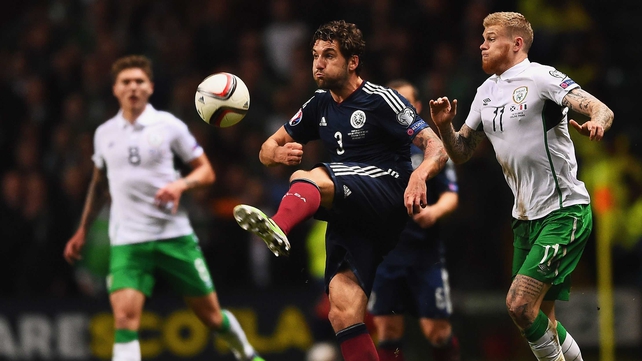 The versatile Celtic man proved to be the man of the match in Celtic Park when Scotland beat Ireland 1-0, when only picked as a result of a late withdrawal by James Morrison.

Mulgrew’s midfield performance against the Irish was near perfection but injury forced the Celtic man out for a large chunk of the second half of the season, only returning for the last few league games and missing a couple of Scotland games in between.

Strachan will be anxious to include the Celtic man and gave him a run out in the centre of defence in last week’s friendly victory over Qatar. Mulgrew should slot seamlessly into the heart of the defence and will play a vital role dealing with the Ireland attack, while orchestrating the midfield in front of him. 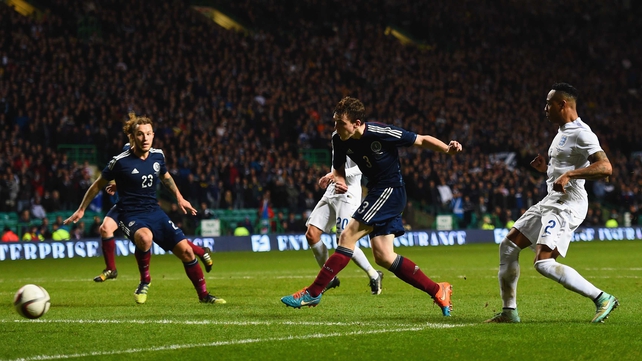 While several of his international team-mates are moving back to the Premier League, the Hull City youngster is going in the opposite direction after suffering relegation alongside the Irish quartet on Humberside.

In reality, Robertson should be snapped up by a top-flight side during the summer as he has shown his quality as an attacking, confident modern left back. Robertson’s energy proved the catalyst for Scotland’s performance and ultimate victory over Ireland in Celtic Park as he had Aiden McGeady and Seamus Coleman playing on the back foot throughout the opening exchanges. The Irish right flank will be keen to reverse that scenario on Saturday and Robertson should find himself tested defensively. 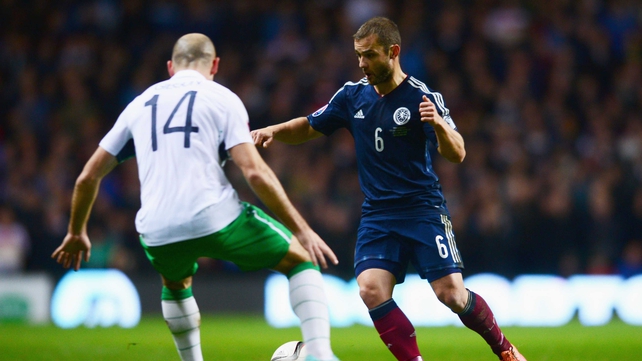 The creative midfielder proved the match-winner at Celtic Park when he seized the moment and curled that sublime effort past David Forde.

Maloney jumped from the sinking ship that was Wigan Athletic mid-season and moved Stateside to sign with the Chicago Fire in the MLS.

The perceived drop in standard from the English Championship will have little effect on Strachan’s thinking and Maloney will again be key to pulling the creative strings in the hostile Lansdowne Road arena.

Maloney will drift, roam and find space against any opposition and will have to be kept under close scrutiny, while his set-piece delivery is another concern for Martin O’Neill’s side. 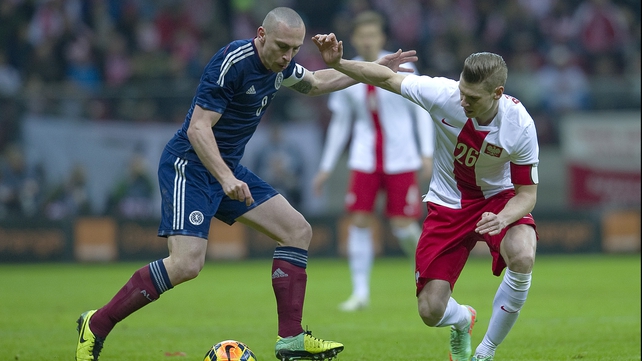 The Celtic skipper is the heart and soul of this Scotland team and will, once again, be a key man in the middle of the park.

Brown was another to stand out in the Celtic Park victory, linking up with Mulgrew in the middle of the park against an inexperienced Ireland midfield duo of Darron Gibson and Jeff Hendrick.

The Irish midfield will have a more familiar look to it on Saturday but Brown will back himself against any opponent and will get plenty of support from the lively pair of James Morrison and Steven Naismith.

Brown will need to keep James McCarthy quiet and it should prove a very intriguing battle in the middle of the park on Saturday. 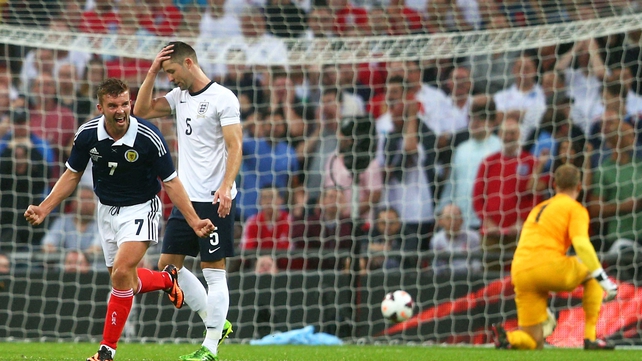 The West Bromwich Albion midfielder missed out on the Celtic Park victory as he had to pull out at the last minute through illness.

Morrison is key to the Strachan way and his energy and attacking mind will prove a test to Ireland’s oft-static midfield.

The West Brom man will be key when Scotland are in possession and will be keen to exploit space on the right as Maloney drifts inside. Morrison also has an eye for goal and will prove one of many attacking threats to the Ireland defence. 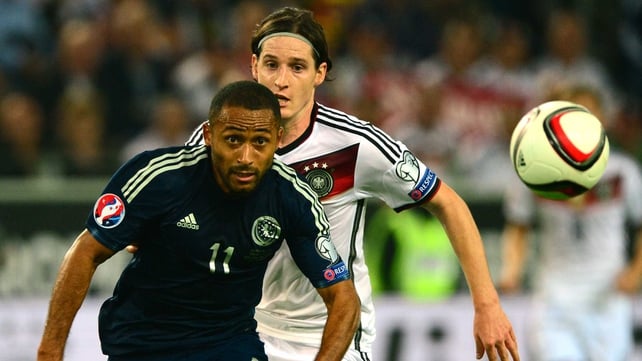 The Watford wide man was bizarrely used at right back in Scotland’s victory over Qatar last weekend. But the run out served a double purpose as the energetic-winger has been out of commission since the start of May when Watford gained promotion to the Premier League and needed the game time, while planting selection seeds in the head of the opposition manager.

Anya has proved a bit of a talisman for Strachan and Scotland since scoring a wonder-goal against Germany and should certainly start, considering he proved a large thorn in the side of the Irish defence last November, linking up brilliantly with Robertson on the left flank.

Anya will need to impress in the opening half as the Scotland boss has several capable replacements on the bench with Matt Richie, Charlie Adam and James Forrest all showing fine end of season form. 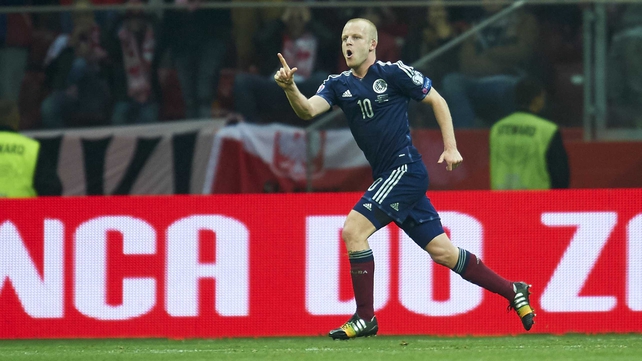 The Everton man proved the difference in the Celtic Park clash and will, no doubt, be employed in the same role on Saturday as he will link up the midfield and attack at the Aviva Stadium.

Another of the Scotland contingent that can be utilised across the midfield or in attack, Naismith will find space and look to drag the Ireland defence out of position, leaving space for the creative midfielders to run into.

Naismith will have to be kept quiet on Saturday for Ireland to keep the Scots scoreless and will have the Ireland manager scratching his head when picking his back four. 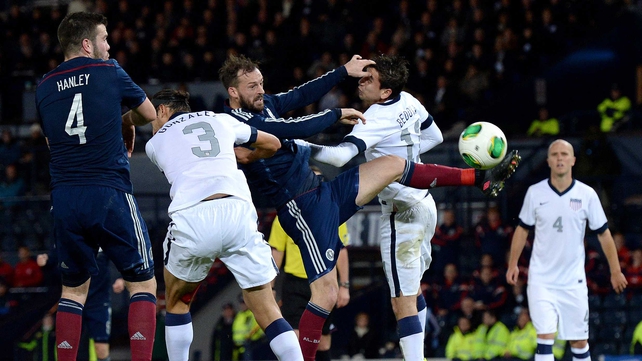 The Sunderland striker postponed his wedding to make sure he was available for this vital clash in Dublin, and the striker is likely to lead the line once again as Scotland look to do the double over Fletcher’s former boss O’Neill. The striker will relish the battle ahead with club team-mate John O’Shea and will be a key outlet to the Scottish side, who should be put under a bit more pressure than experienced at Celtic Park.

While not the most prolific of goalscorers, Fletcher has an eye for goal and is fond of the odd audacious attempt, which could test the Ireland rearguard.