Roy Hodgson has told Raheem Sterling that his door is always open if he needs to have a heart-to-heart about his contract dispute with Liverpool.

Hodgson said at the weekend that Sterling needed to develop "thicker skin" to deal with the flak he is receiving from the stands.

Liverpool supporters heckled the forward in the warm-up before their final match of the season at Stoke and on Sunday the home support inside the Aviva Stadium in Dublin booed him every time he touched the ball during England's 0-0 draw against the Republic of Ireland.

The conflict between Sterling's camp and Liverpool shows no sign of being resolved and Hodgson admits the 20-year-old will have to get used to the idea of being booed.

But the England manager does not want one of his most talented players to suffer so he will happily speak to Sterling one-to-one if he feels he needs help.

"Wayne (Rooney) might (speak to him), but we don't ask players to do that job for us. We make it clear as a coaching staff we are always available and more than happy to listen to their woes or any situations that develop," Hodgson said.

Last month, Sterling's representative Aidy Ward allegedly told the London Evening Standard that his client would not sign a new deal at Liverpool even if they offered him £900,000 a week.

That has prompted renewed accusations of greed towards the player, who was one of the worst performers in a dull game in Ireland.

"At the moment he is being portrayed as someone who in some way is hurting Liverpool so unfortunately the Irish fans will turn on him, that's the way it is," Hodgson added.

"If you can't accept being booed and jeered by rival fans you are in the wrong game basically if you want to play for England.

"You will get plenty of booing and jeering in Slovenia as well and you will probably even get a little bit in San Marino so you better learn to live with that. That shouldn't bother you.

"It's important that he develops the necessary manner or wherewithal to deal with it.

"I think it would be incumbent on him to sort out his future with Liverpool within the timescale that takes."

In fairness to Sterling he was not the only man who flopped in Dublin.

The England captain was not reprimanded by his manager, though.

"We know what our players are capable of and sometimes even the important ones don't live up to expectations and don't have a good game," Hodgson said.

In fact, all the players were spared a dressing down by Hodgson in the dressing room.

"I don't get angry," he said with a chuckle.

"I have no reason to be angry because we have just played our 10th game unbeaten - if I did that I would destroy relationships.

"The players will have to accept the criticism and hopefully use it as a spur to make sure it doesn't happen against Slovenia on Sunday." 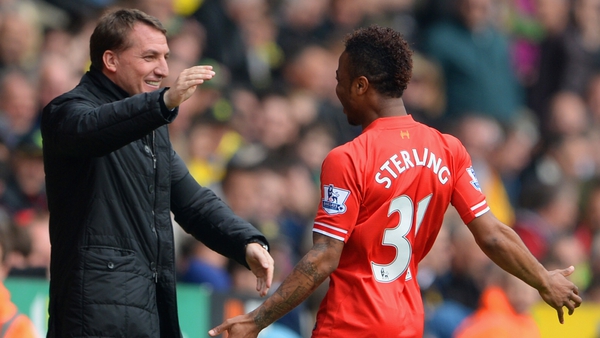