Republic of Ireland manager Martin O'Neill is refusing to allow the furore surrounding FIFA's controversial loan to distract him from his Euro 2016 mission.

The 63-year-old started preparations in earnest on Monday morning for this weekend's key Group D clash with Scotland in Dublin, as the FAI struggled to escape the glare of the spotlight under which it was thrust when news of a €5million payment from the game's governing body was confirmed last week.

O'Neill and his coaching staff took to the training field at Gannon Park in Malahide with those players who were not involved in Sunday's 0-0 friendly draw with England, while those who did play headed off for a pool-based recovery session.

But as they went about their business, FAI chief executive John Delaney was facing calls to stand before the Oireachtas and explain the situation, although the man he appointed as Giovanni Trapattoni's replacement in November 2013 was focusing solely on football.

"I am here for one major thing: my job here is to try to prepare these players for this match" - Martin O'Neill

Asked for his reaction to the latest development, O'Neill said: "Exactly the same as I had yesterday. I don't know what else has happened to it. That's an issue at this minute outside my jurisdiction. I genuinely don't know enough about the ins and outs of it.

"Someone asked me yesterday would I make a comment on it at some stage or another - I'm sure that possibly will be the case.

"But really in essence, I am here for one major thing: my job here is to try to prepare these players for this match and I don't think that anything else, from my viewpoint, should be distracting from that."

If O'Neill's stance was convenient it was also necessary, with few within the Ireland camp doubting the significance of Saturday's game.

Win and Ireland are right back in the hunt for automatic qualification; lose and France will seem beyond them, and that could spark a clamour for fundamental change.

"Poland are very, very strong and Scotland, there seems to be a renaissance there" - Martin O'Neill

O'Neill, however, remains hopeful his team can emerge from a tough group to achieve its objective.

He said: "If you were speaking to [Scotland boss] Gordon [Strachan], I think we find ourselves in a pretty difficult group. We are in with the world champions, who would be expected to go and win the group, then it seemed as if it was going to be a real scramble for second place.

"Poland are very, very strong and Scotland, there seems to be a renaissance there, which is good for Scottish football in that sense. But yes, it's been difficult - but nothing is impossible yet and there's a distance to go.

"We are only halfway through the group."

Ireland lost by the only goal in the reverse fixture in Glasgow in November, and O'Neill is aware there could once again be a fine line between success and failure.

To that end, he will hope to have skipper Robbie Keane, who was due to arrive in Dublin on Monday afternoon after playing 90 minutes for the Los Angeles Galaxy in their 1-0 home defeat by Vancouver Whitecaps on Saturday evening.

Keane's 65 senior international goals mark him out as one of the top marksmen in world football, but the 34-year-old is nearing the end of his career and the lack of an obvious replacement is a concern.

O'Neill said: "It's been an ongoing problem for a long time, hence the importance, of course, of Robbie Keane over the years, who you would have to say has been the most natural scorer that we have possessed.

"It's not just a problem peculiar to ourselves. Other nations suffer from it and if you don't have a natural scorer in your side, then regardless of what happens, even if you create chances in the game, taking them is the big thing at the very, very top of the game.

"You see the Champions League final there, where you know you have got three players there capable of scoring a goal. It's a lovely feeling to have when you have got world-class players being able to take defences apart.

"If you haven't got that, then you have to use other methods to try to win games." 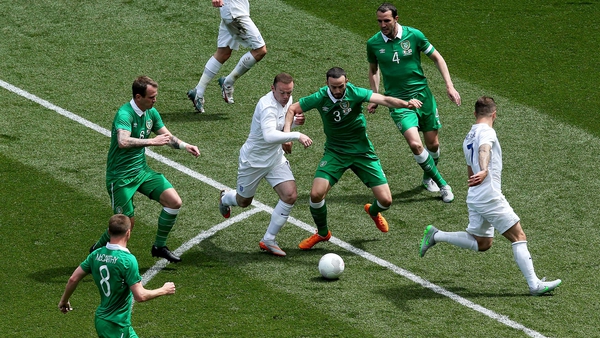 Ireland and England play out stalemate in Dublin