John O'Shea has described as "ridiculous" claims that the Republic of Ireland's players should have been handed a share of FIFA's €5m loan in compensation for their World Cup play-off heartache.

The 34-year-old defender insists all he and his team-mates would have asked for in the wake of their Thierry Henry-inspired exit at the hands of France in November 2009 was a replay.

The suggestion, as the Football Association of Ireland's deal with the game's governing body was made public this week, came from then France coach Raymond Domenech, but cut little ice with O'Shea, who played in the Stade de France that night.

"You are talking about what the players would have been looking for from that point of view. Ultimately, it was done and dusted, the game was over, but if there was going to be anything from it, it would have been, say, a replay.

"It wouldn't have been a case of monetary benefits from that point of view. But look, the game was done and dusted and these things happen, as they say."

O'Shea's comments came after the FAI published a copy of the confidentiality agreement it signed with FIFA, which describes the cash payment as an "inducement".

The document includes the paragraph: "On or before January 15, 2010, FIFA and FAI have entered into a loan agreement over 5million euros as an inducement for the FAI to enter into this agreement. Further, the FAI will receive an additional Goal Project in the amount of 400,000 US dollars than the one executed in 2009."

Details of the arrangement have simply added to the furore surrounding FIFA in the wake of president Sepp Blatter's re-election and subsequent announcement of his resignation, with the FAI and, in particular, chief executive John Delaney finding himself cast into the limelight.

On Saturday, Giovanni Trapattoni, Ireland manager in 2009, said that Blatter had offered to find him what he called "a way to forget" the incident.

However, within the Irish camp, there has been a concerted effort to circle the wagons with manager Martin O'Neill and his players, who face England in a friendly at the Aviva Stadium on Sunday and Scotland in a crucial Euro 2016 qualifier next Saturday, refusing to be drawn into the brewing row.

Asked if Delaney enjoyed his full support, O'Neill said: "John Delaney brought me into the FAI. He brought me in, wanted me to manage the side - I was delighted to do so, delighted to have the opportunity, and I would like to see that through.

"That's what I'm looking at and that's what I want to do. I haven't had any discussions on the political side with John or the FAI board at any given stage."

O'Neill admitted he had little knowledge of the agreement other than what he had read when the story first emerged last year.

He said: "Not really. It had been made public knowledge, I think, about six or eight or 12 months ago, or something like that. It was out there in the public domain at the time, so I wasn't any more aware than anybody else and it has all come to a head just at this moment.

"But I haven't had time myself to study it in any sort of depth and I am certainly not a European lawyer, so I won't be taking any of that into consideration.

"It's come up here at a stage where you really do want to concentrate on what we are here about, myself as the manager, John as a player, and I think that is pretty important.

"What I could say, I suppose, is that the FAI board gave me this opportunity to come and manage the team, I was delighted to take it and obviously wan to try to push that forward on the footballing side as much as I possibly can.

"Naturally, this game and the Scotland game are taking my almost undivided attention." 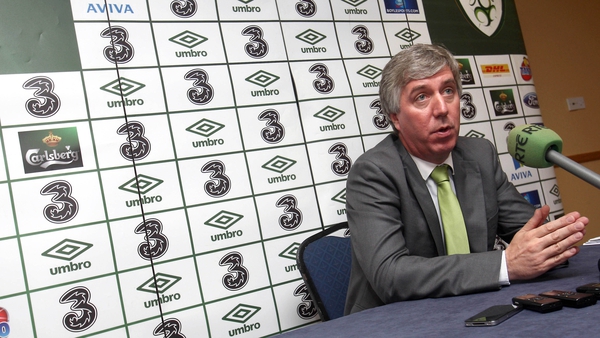